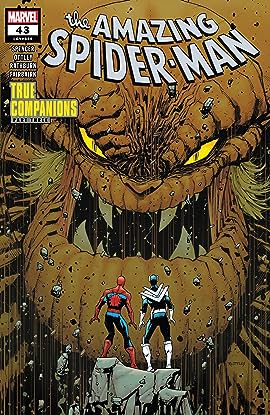 The third part of True Companions has finally come out after weeks of waiting and the story has added something to the lore of Spider-Man.  A pet?

Nick Spencer’s current run on The Amazing Spider-Man has been solid, especially with the use of the Spider-Man secondary crew.  The increased role of Boomerang in Spider-man/Peter Parker’s life has been enjoyable to watch.  The return of Mary Jane to the narrative has been extremely welcome (though I worry about what is to come for the pair) and the use of Mayor Fisk, who has been all over the Marvel books lately, trying to get on Spidey’s “good side” is a cool bit of juxtaposition.

Now we bring on Gog.  We had an entire origin issue dedicated to Gog, which tells you that there may be some plans for Gog.

The best part of this issue is how the Spider-man character shines through every moment of the book.  Spencer does a great job of showing us what Spidey would do in each situation, and how the character would react.  This was one of the first times since the switch that I really felt as if Spidey was done right.  Not taking anything away from the rest of the run, but, after Tom Taylor, most would be seen as lesser.

However, this really gives me hope that there are great things on the horizon for Peter Parker and his alter ego.