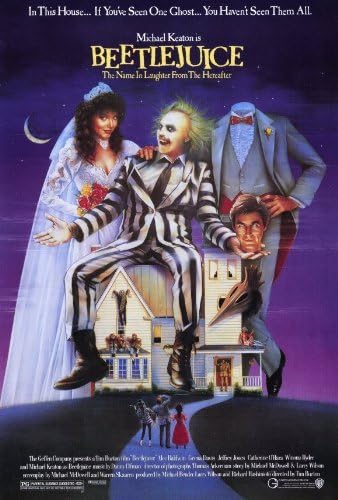 Wait.  I should be more careful.

One of the most original and fun movies of the 1980’s was the Michael Keaton starring vehicle, Beetlejuice.

A young couple Adam (Alec Baldwin) and Barbara (Geena Davis) purchased a new house and moved in.  Unfortunately, soon after, they were killed in a car wreck only to discover that they were now stuck in the house as ghosts.  They could not leave and could not be seen.  Then, the house was sold to a pretentious couple Charles (Jeffrey Jones) and Delia (Catherine O’Hara), who, along with their depressed daughter Lydia (Winona Ryder), arrived in the house, ready to renovate everything.

Adam and Barbara decide that they would use their ghostly powers to scare them out of the house, but Adam and Barbara discovered quickly that they were not the scary types.  Desperate, they found help from a spirit who they could only summon by saying his name three times:  Beetlejuice (Michael Keaton).

This film is one of the greats form the 1980’s as it blends some exceptional humor with some dark monstrous images.  The entire “Day-O” sequence of the film is just one of the most memorable musical moments in movies.

Michael Keaton is just tremendous as the troublesome Beetlejuice, funny, witty and rotten to the core.  You could tell immediately that Beetlejuice was not going to be helpful in the long run.

There are some great cast members here.  Moving past the main actors, Catherine O’Hara and Jeffrey Jones are fantastic as the snooty new owners of the house.  We get Glenn Shadix as Otho, Robert Goulet, Dick Cavett, Susan Kellerman, and Annie McEnroe playing smaller, but entertaining characters.

The special effects are a little dated, but for 1988, they were not terrible.  This could be updated in this area.  There have been rumors of a Beetlejuice 2 which would feature Michael Keaton returning.  Keaton is masterful in this role and I would love to see what he had to add to the story.

Beetlejuice is a classic movie that is a load of fun.