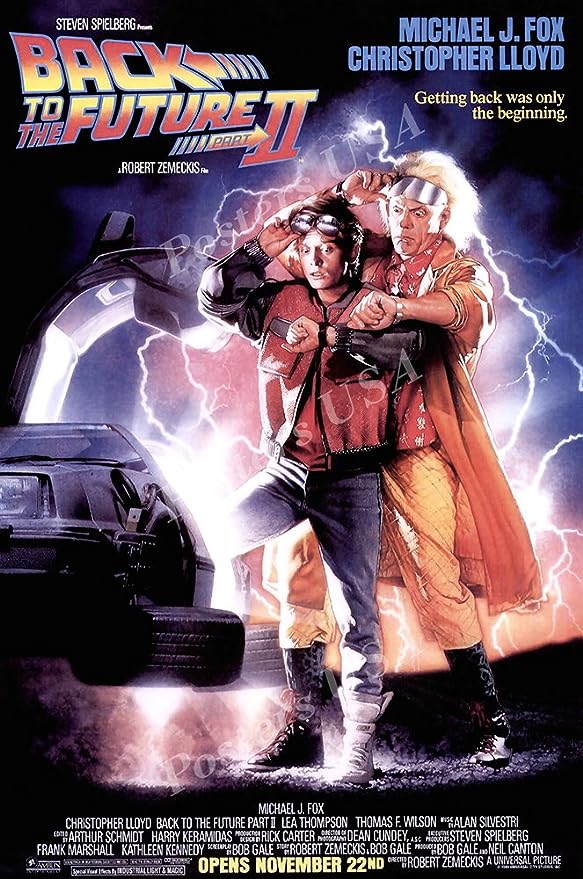 In Back to the Future Part II, Marty (Michael J. Fox) and Doc (Christopher Lloyd)  head into future, as we saw at the end of the original, to do something about Marty’s kids.  However, once in the future, old man Biff (Thomas F. Wilson) gets his hands on the DeLorean and, with the Gray’s Sports Almanac, visits his young self so 1955 Biff can make millions betting on sports.

This led to a dark, dystopian 1985, where Doc and Marty return to, shocked by what they find.  They realize that they have to head back to the past once again to retrieve the Sports Almanac  and fix the future.

I actually like Back to the Future Part II quite a bit.  I liked it more than I did the Part III in the old West.

I think that this would be an even better movie if they had changed up one thing.  I really liked the 2015 hover board chase, which echoed the chase with the skateboard in the original movie.  I loved the dark 2015 world with rich Biff.  I enjoyed the trip back to 1955 with the way they mixed the new scenes in with the original film’s third act.  The end twist is epic and funny.

The one place that is not great is the trip to Marty’s 2015 house, seeing his family and meeting his kids.  This whole section with injured hand Marty getting fired and Jennifer (Elisabeth Shue) seeing her future self is simply terrible.  This entire segment really taints the trip to the future, setting up a waste of a storyline just so the film can add the whole “Don’t call me a chicken” bit that had not appeared in the first movie at all.  The removal of this section would improve the film dramatically and would not change the story of this movie at all.  And we would not have to see Michael J. Fox dressed up like his daughter.

Otherwise, I thought the trip to 1955 was very clever and well written.  There were twists and turns making you unclear how Marty was going to get out of the situation.

I have heard people complain that this film’s third act was too familiar, but I really thought that was the purpose.  Several of the jokes and the scenes depended on reacting and adjusting to what was happening from the original movie.

This was also one of my favorite uses of time travel and the explanation of it.

Back to the Future Part II is much better than what it gets credit for, despite having definitive flaws in the first main act of the movie.  Michael J. Fox and Christopher Lloyd are their normal awesome selves and the writing is extremely clever.