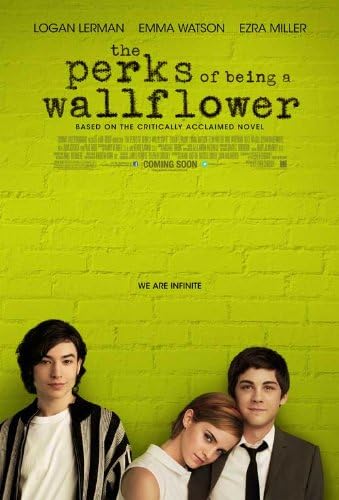 Recently, the Top 10 Show Re-List had a list of Coming-of-Age movies as its topic.  I compiled my list, but one of the films that appeared on the list of the shows turned out to be The Perks of Being a Wallflower.  I had never seen this movie and Matt Knost specifically raved about it. He said that he did not expect to like it as much as he did and that it was a film that people should watch.

This was a film that I had never seen and had not had any interest in seeing.  I saw it on the streaming platforms around the web but just had not interest.  When Matt gave it such a glowing rave, I added it to my summer to watch list.  It was on Netflix and it was going to be easy to see.  Now I just had to find the mindset to watch it.

It wasn’t about time.  I have the time.  It just felt like a film that I had to get into the right head space to watch it.  I was still afraid that I would be bored and that I would not like the film.  I had always liked Emma Watson from the Harry Potter franchise and Logan Lerman had been a young actor I liked.  Even still, I was not sure if I wanted to watch it.

I am so glad that I did watch this today because I just found it to be so brilliantly done and totally compelling.  The film was filled with amazing young characters, brought to life by some talented young actors and it tugged on the heart strings.

It also was able to catch me off-guard in ways of story, which I did not expect.  I do not usually get shocked by movie scripts so when it happened here, it made me all the more impressed by what they had done.

Logan Lerman was amazing as Charlie, the freshman boy who is befriended by a group of seniors.  Charlie had his own troubles but I had not expected them to be more than what I expected.  Charlie did not fit in at high school and finding this group of people who also was outside the norm of the school was a blessing for him.

Each of them had major issues.  Ezra Miller’s Patrick is quirky and bold, but his own secret has emotional stakes for him and another.  Emma Watson’s Sam was a sweet girl with a bad reputation for making bad choices.  These two helped Charlie find his way through high school even though they did not have a real clue about the depth of the pain he was in.

The film had fantastic music and did a memorable job of interweaving the music into the plot.  Set in 1994, there are some great moments from the Come on Eileen dance scene to the David Bowie Heroes driving scene.  The music made every scene better.

This movie truly does show the gamut of emotions that young people go through during these uncertain times of their lives.  One only hopes that they can find people who are as important to themselves as these friends turned out to be.

It would have certainly made my own Coming-of-Age top 10 list had I seen it before.  It was a wonderful movie.