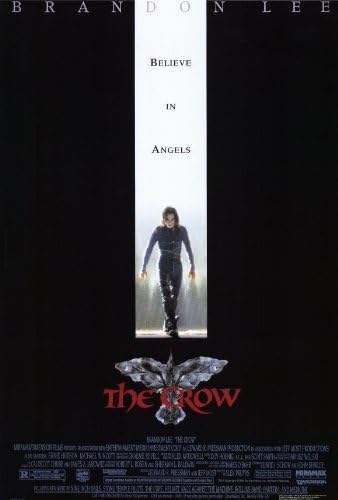 Ah, what could have been.

A film shrouded in tragedy, The Crow is one of the greatest revenge films ever made and one of the earliest films that was based on a comic book to be quality and well-done.

Eric Draven (Brandon Lee), a rock musician, and his fiance Sarah (Rochelle Davis) were murdered on the eve of their wedding by a band of dirtbag criminals. Eric thrown out of the sixth floor window and Sarah, raped and beaten, dies later at the hospital.

A year later, a black crow arrives on Eric’s grave, tapping on the tombstone.  This causes Eric to pull himself out of the grave.  Discovering that he had returned from the dead, Eric, with his face covered in white makeup, started his path of revenge.

Of course, The Crow was marred by the tragic death of its lead star Brandon Lee, son of the legendary Bruce Lee.  With eight days of shooting remaining, Brandon was accidentally injured by a malfunctioning round of blank ammunition.  He died later during surgery.  Producers rearranged certain scenes and used tricks to finish the scenes they still needed to make sure that the film was released.

The Crow was a great film.  Lee was spectacular here.  This could have easily been a massive breakthrough for the young actor.  His charisma, his presence, his aura stood out on each image.  The character was compelling and easy to root for.

Ernie Hudson played police officer Albrecht and worked very well as the supportive cop, the man who is the audience’s eyes, his wonder for what was happening was the same as what we felt.  Hudson brought a true gravitas to the role and his very appearance gave a credibility to the film.

The story is very simple, but the key to the film is the imagery in each scene.  There are beautiful shots in the film, a visual cornucopia of violence and style.  The images tell the story and help set the tone of this film better than most of the words.  It is like a comic come to life.  There were several moments where I was watching the film where I thought, “That looked like a splash page from a comic.” It was bathed in darkness as well, with color used sparingly.  It created something wonderfully dark.

Yes, the film is very violent, but I do not think that it is gratuitous.  It has cinematic element to it and it works so well.

The only issue I had while watching The Crow was that I kept thinking about professional wrestler Sting.  Sting took a “Crow-like” gimmick after the film came out and he looked quite a bit like Brandon Lee.  It was distracting for me, but that was not the film’s issue.  It was mine.

The Crow was a great film.