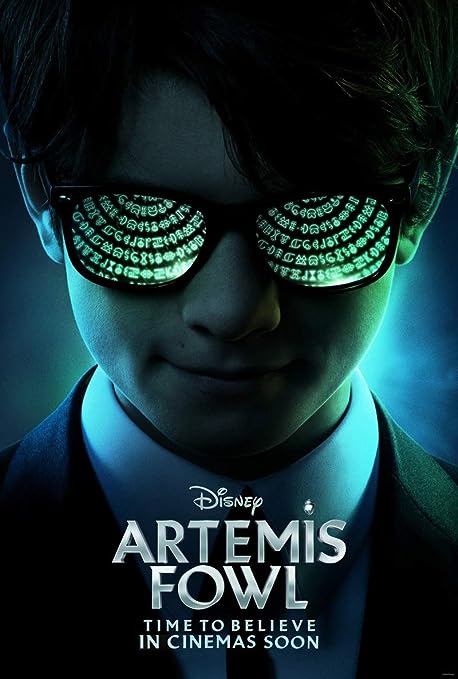 Artemis Fowl has been scheduled for theatrical release for while now.  It got pushed back once because of the competition and then a second time because of COVID-19, eventually finding its way onto Disney +.  I have been anticipating the release of the film for some time because I like the idea and I felt as if the trailers looked better than most people claimed.  There was negativity surrounding Artemis Fowl, but I was still excited to see it.

Do you know that old phrase, “Be careful what you wish for?”

Based on the young adult book series by Eoin Colfer, this was one of the biggest misfires in many years.  Artemis Fowl is like if Harry Potter and the Lord of the Rings combined, but without any sense or any form of magic.

Having said that, I did not hate watching this.  I did not find myself wishing that this was over.  I actually had a decent time watching the movie.  It reminds me of staring at the car crash.  You know you shouldn’t do it, but you can’t help yourself.

Artemis Fowl (Ferdia Shaw) is the namesake of his infamous father (Colin Farrell), a well-known master thief.  His father has been kidnapped by the villain with a flashlight who contacts young Artemis and demands a trade… his father for The Aculos, this film’s MacGuffin that has some kind of magical power of the Fairies world.

Oh, did I forget to mention that there were fairies?  Yes, they, along with goblins, trolls and dwarves, live in an underground world inside the earth.  Holly Short (Lara McDonnell) was one of the fairy patrol (or whatever they were called… it is called the LEPRecon)) and her father was supposedly a traitor and involved in stealing the Aculos.  She gets deeply involved despite a penchant for not following the rules.

Then we meet Commander Root (Judi Dench).  What can I say about Commander Root?  I love Judi Dench, but good lord.  The last time we saw Judi, she was dressed as a giant cat named Old Deuteronomy in the bizarre musical Cats.  Now she is a high ranking leader of the LEPRecons, dressed in green with pointy Spock ears, and a gravelly voice.  Ironically, she is an Academy Award winner.

There is also a dwarf named Mulch Diggums (Josh Gad) who we meet immediately as he is used as the narrator for parts of the movie.  When we see him narrating, he has been arrested by someone and he is, for some reason, in black and white.  Mulch is a thief/pickpocket and is apparently a giant dwarf.  Picture Hagrid but smaller and with less charm.  Oh, and a gravelly voice too.

Domovoi Butler (Nonso Anozie) is the Fowl’s manservant/butler, but apparently, as the film tells us, you should never call him that.  Why?  We never find out, nor do we see it happen.  When something like that is dropped, usually that sets up a scene where that very thing happens.  Nope.  Not here.  He brings in is little sister Juliet (Tamara Smart) who really does nothing but blend into the scenery.

I will say that this movie flew by.  Perhaps that is because they shoved so much into the first half of the movie, it never gave you a chance to be bored.  In fact, I had paused the film at one point and saw that it was over half done, which shocked me.  This 90 minute film probably should have been something like 3 or 4 episodes of television to properly introduce everything that it did in the first 45 minutes.

So many things happen that make no sense whatsoever.  Artemis has his crew capture Holly and he locks her up in a cage in Fowl Manor.  They interact, all negatively, until Artemis needs her help.  He asks her “Do you trust me?” and I am like….why would she?  The entire scope of this relationship is antagonistic.  If I remember correctly, she had threatened to kill him once. But now that the plot needs them to be friends, they are seemingly tight as thieves.

There is a plot thread of a crooked, power hungry member of the LEPRecons, but that is neither developed or returned to in the film.  It is just completely dropped.

Artemis Fowl cost $125 million dollars to make, but it is difficult to find where that money may have gone.  There are some moments of CGI that are as bad as we’ve seen in years.  In fact, there are times when you may think you are watching an old 1980/1990 film.

As I said, this is easily one of the worst movies of the year, but I did get a strange satisfaction from watching it.  This could fall into the category of so bad it is good, but that might be too good for it.  I was entertained by the train wreck though.  I laughed a few times and stared at amazement that anyone green lit this.  Kenneth Branagh directed it, which is a shocking fact.