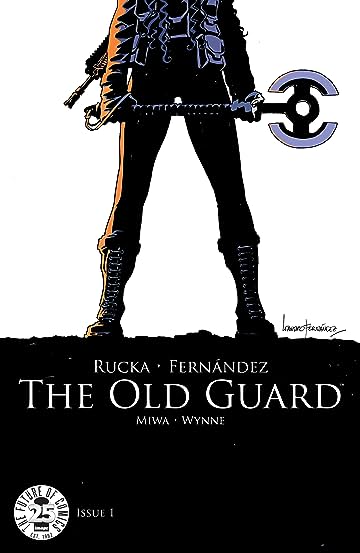 I was able to pick up this five-issue mini series from Image Comics at my local comic shop recently.  The selling point?  I have been looking at more independent comics over the last year or so and these covers looked intriguing.  Then, I inquired about the storyline and it sounded decent.

Then I discovered that it was going to be an upcoming Netflix movie starring Charlize Theron which is reportedly debuting in July.  That helped me decide.  So I picked up the series (my friend Todd who worked at the shop had to find me issue 4) and I have finished it tonight.

I have to say that I really enjoyed this book and the characters I found within.  There was great action, some great character beats, and some excellent writing.

The art is original too.  From Leandro Fernandez, the art may not have the specific details, but the look of the panels really stood out and the art helped set this mood of the story.

The group of characters, Andy, Booker, Nicky and Joe and the new recruit Nile, are fascinating and each have their own developed character.  They look at the idea of how immortality affects these characters.  The five of them are a group of mercenaries who are immortals.  They are seemingly unkillable, though there is more to this than what we discover.

We do not find how this happens or why these people keep coming back from wounds and attacks that should kill them totally, but we do find out that they will die at some point.

Apparently, there is another series in the works, and I am excited for that, as well as the new Netflix film.  It makes me wonder what other great comics have I missed with my devotion to Marvel?