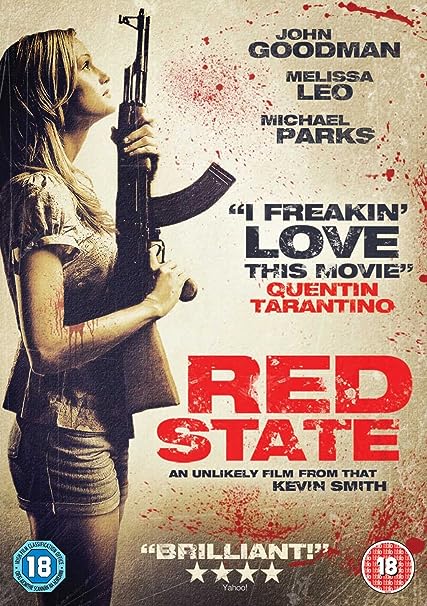 I consider myself a fan of Kevin Smith.  However, I have never been a huge fan of many of his movies (outside of Dogma which I love).  Most of the movies that he makes, I find okay at best.  I really love listening to Kevin Smith tell stories.  I am a fan of his podcast and his verbal skills.  He also seems to be a truly fine person.

Red State feels like a totally different film than most, if not all, of Smith’s oeuvre, and I enjoyed the switch up.

ATF Agent Joseph Keenan (John Goodman) was also on the trail of Cooper, but for different reasons.  When all of the forces came together, all hell broke loose.

This movie kept me off guard the entire time because you never knew what was going to happen.  Every time it felt as if we were following a certain main character, that character winds up dying.  Nobody involved in the story felt like our hero.  They all felt like rotten people, whether conflicted or not.

John Goodman is the closest we have to a heroic presence in the film but he seemed to be concerned more with self issues than doing the right thing.  Admittedly, he was the most conflicted in the cast and Goodman gave a stellar performance.

Michael Parks is great as the charismatic cult leader.  It gives you a real idea of how these kinds of men are able to get, apparently, normal people to follow and commit atrocities in their name.  I feel that this character is all the more relevant in the world today as I can see pieces of certain leaders in his role.

The film is very violent and filled with gun play.  The seemingly randomness of the deaths during the shoot out speaks to the chaotic nature of guns and how they can be damaging depending on who are using them.  However, the government forces are not shown as the hero here either as their overall goal in the situation is anything but moral.

The ending is controversial, but I found it very funny and ironic.  The ending is absolutely an example of a deus ex machina, a literary technique where “an unexpected power or event saves a seemingly hopeless situation, especially as a contrived plot device.”  Many times this technique can be seen as a negative, but, when used properly, it can be a wondrous event.  This ending may feel to some anticlimactic, but I found it to be a perfect end to this film.  It turned out to be as random as the rest of the film had been.

Red State does not follow your expectations of how this type of movie should be and that is part of its charm.  The film has solid performances and keeps the audience confused and uncertain about how this is to be resolved.