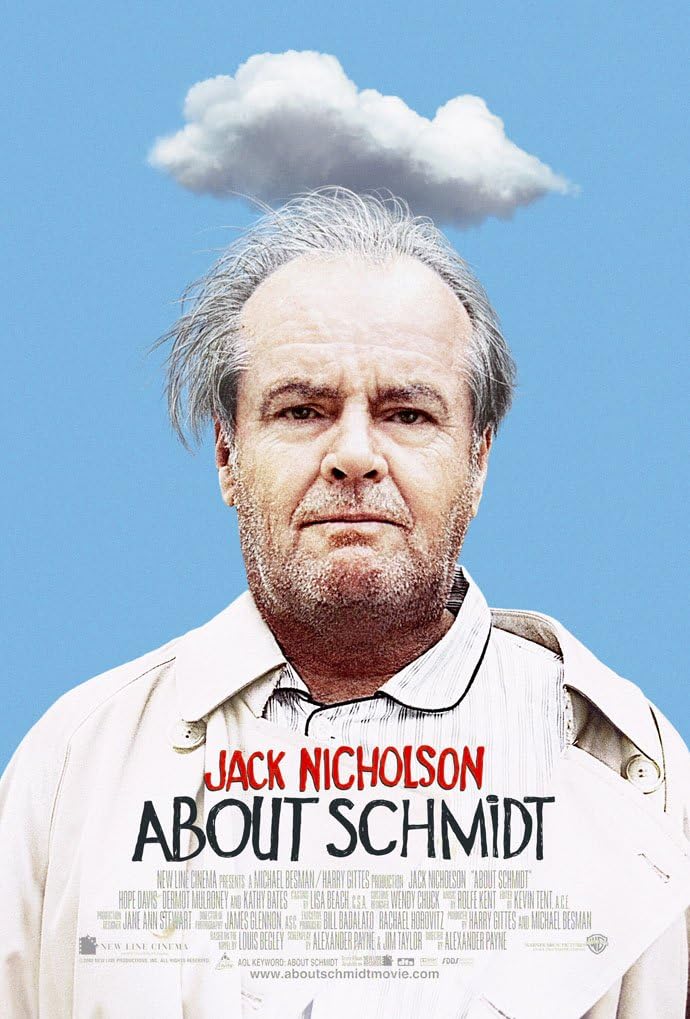 As I continued to fill up my eventual Top 10 Jack Nicholson films, I watched About Schmidt, one of the top 5 films in the combined list of Matt and John on the Top 10 Show.

I had thought I had seen this one, but it was not too long into it that I realized that I had not.

After 42 years of marriage, recently retired Warren Schmidt (Jack Nicholson) lost his wife Helen (June Squibb) very suddenly.  Warren was already struggling with his life, his marriage and his purpose, and this loss sent him into a downward spiral.    With his daughter Jeannie (Hope Davis) preparing to get married to a man Randall (Dermot Mulroney) whom Warren does not like.  Warren takes off on the road in his RV to go see his daughter.

Jack Nicholson gave a Oscar-nominated performance as the grief-stricken, lonely and sad man.  You can see the layers of pain and anguish hidden in the eyes of Nicholson.  He has an early film rant about his deep feeling about his wife that gives you an idea about Schmidt.  Warren Schmidt could be such a negative character, but Nicholson imbues him with such life and emotion that you cannot help but connect with him.

There are some great supporting performances in this movie as well.  Kathy Bates played Roberta, Randall’s mother and dominates every scene that she is in.  Howard Hessman played Larry, Randall’s father.  I love June Squibb in just about every movie she is in and, though she had little scene time, she makes a lasting impression in About Schmidt.

There is a lot of humor in director Alexander Payne’s film.  He combines the natural humor of the situation with the emotion of the moment in a beautiful and poignant manner.  They spend some wonderful moments with Warren on his travels to his former childhood home, to his college and a RV park.  The film is more of a character piece than a plot driven story.  We see how everything affects Warren and develops that character even more.

About Schmidt was a really wonderful movie that I enjoyed tremendously.  I am glad I got a chance to see this because of the Top 10 list because this is most likely a film that I may not have had a desire to go back and see.