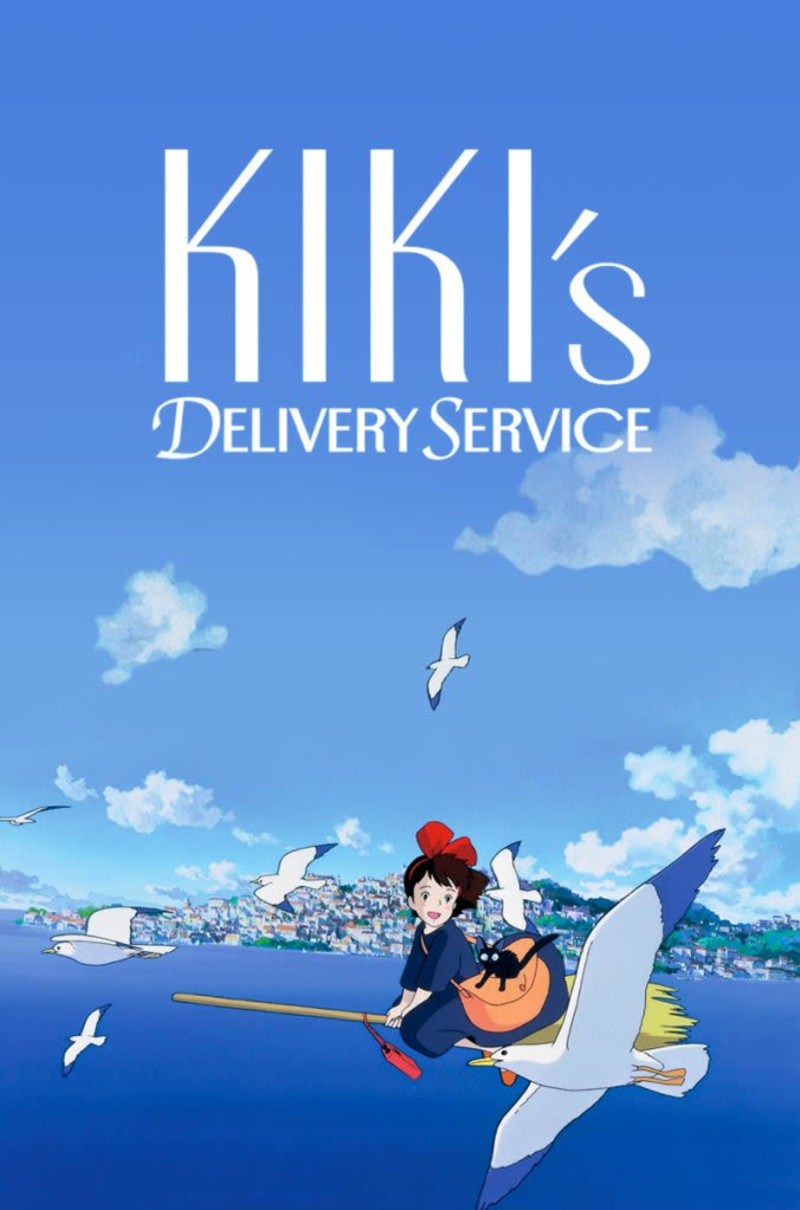 Hayao Miyazaki’s next film for Studio Ghibli turned out to be a charming and breezy film featuring a young witch named Kiki.

In Kiki’s Delivery Service, Kiki is a 13-year old witch and, in tradition with witch training, she leaves home to survive by herself for a year.  Accompanied by her black cat Jiji, Kiki finds a new town in which to live and, since she can fly exceptionally well on her broom,  starts up her own delivery business.  Unfortunately, Kiki has some problems with her own self-image and it causes her to struggle with her power.

This film is fun and very light-spirited.  While it is still a film targeting a younger audience, I actually found this much more entertaining , unlike the other Miyazaki films meant for young children.

Probably the reason behind that is the charming and friendly character of Kiki.  She is remarkably likable and filled with honesty and heart.  The new English dubbing version of the film has Kirsten Dunst voicing Kiki.  It also has Phil Hartman providing the voice of Jiji the black cat.

Here comes the regular animation comment.  It is absolutely beautifully rendered and could be considered a piece of art.  The animation seems to be getting better with every movie released by Studio Ghibli, which is saying something.

The plot of this movie is not that important.  This is a character piece, zeroing in on Kiki and her path to becoming a successful witch.  She has to deal with such problems as Tombo, a boy who takes an immediate shine to Kiki, weather challenging her delivery business and other kids who are keeping her an outsider.

Some of the supporting characters in this film are just sweet.  Osono and her bakery provides room and board for Kiki while her first delivery customer Melanie MacQueen becomes a close friend.

Kiki’s Delivery Service does not dive too deeply in the mythology of the world.  Everybody knows about witches and they are not seen as a negative thing.  In fact, most of the regular people look at Kiki with awe and amazement when she flies.   Most of the witch ideas such as the apprenticeship when she turned 13 are dealt with as if it is a known commodity.  That is not a bad thing, but it does not provide a world that is deep.

The film is sweet and charming.  The characters are enjoyable and easy to watch and the movie has some very positive messages of self-worth and friendship.