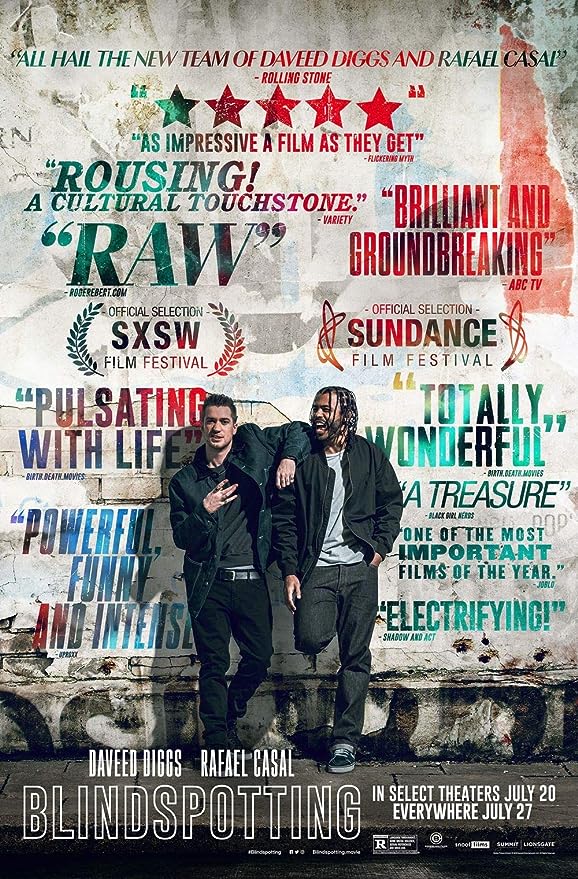 Blindspotting had been placed on my “to watch” list for the summer after I saw Dan Murrell’s video featuring all of his blu-rays.  It sounded interesting, but it was not until I watched Hamilton on Disney + and was awed by the performance of Daveed Diggs as Thomas Jefferson that this film bumped to the front of the list.

Long time friends Daveed Diggs and Rafael Casal wrote and starred in this film that dealt with some big time racial issues as well as a friendship and how far a friendship can be pushed.

Collin (Daveed Diggs) has just gotten out of prison and is on probation.  He met up with his lifelong friend Miles (Rafael Casal), whose volatile nature threatened to place Collin back in trouble.

When Collin witnessed a police shooting, the pressures of his life began to engulf him.

Daveed Diggs is a superstar in the making.  He is just spontaneous, quick-witted, charismatic and simply glows on the screen.  He is one of those actors who you cannot wait for what he does next and his performance here is powerful and poignant.

The story has so much going on that you can feel the weight each moment places on Collin.  As an audience member, you can sense how each situation drags Collin down more and more.  You are just as frustrated with Miles because you see how destructive he can be, but you know the connection between them is special.

There are some uncomfortable moments that range from feeling uncertain to downright fearful and these moments work extremely well.  You are never quite sure what was going to happen next and, while you are on this path, you are remarkably entertained.

I’m not sure how I missed this film in 2018 because I thought it was fantastic.  I remember seeing trailers for this, but it is possible that it did not come to any of the local theaters I attended.  Either way, if you have a chance to watch this, the film is tremendous and amazingly relevant.