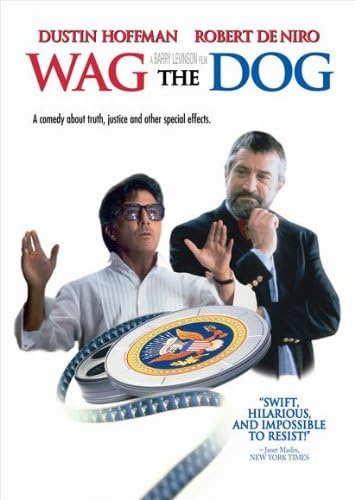 This past week, the topic on the Top 10 Show with John Rocha and Matt Knost was Best films of 1997.  During that show and my research to construct my own top 10 list, the movie Wag the Dog showed up.  I had not seen this film in a long time and I wanted to watch it again because I had remembered enjoying it.  Now that I have seen it once again, I truly loved the movie.

It certainly speaks to the unbelievable world of presidential politics and the ways that the media could be manipulated to tell the narrative that a campaign may want told.

In order to help change the topic of a sex scandal a few days prior to a presidential election, Conrad Brean (Robert DeNiro), a spin doctor, approached Hollywood producer Stanley Motss (Dustin Hoffman) for help in spinning a yarn about a war that they would create on their own.

Wag the Dog was extremely funny, but there is an underlying anxiety that makes one think that this is the type of situations that actually happen in the world.  Perhaps not at the level that they show in the movie, but the effort to change a certain topic or to distract from one story by having something else for the media to talk about seems to happen all the time today.

Robert DeNiro is amazing in this film.  Dustin Hoffman matches him with each scene.  Anne Heche has another side to the puzzle as Winifred Ames, an aide on the campaign.  These three create an amazing group of characters that are totally funny in situations that sure seemed to be anything but.

Woody Harrelson’s portrayal as Sgt. William Schumann, a supposed hero who turns out to be anything but one, is maybe the funniest point of the film.

The film’s pace is beautiful, nothing being wasted.  Wag the Dog is just around 90 minutes and every scene works.  Director Barry Levinson does a wonderful job creating the story and getting the images that are being created by the characters to show a nation.

The movie is a dark comedy that is extremely funny, but it speaks a truth that might make you question anything you see on the news or that comes out of the mouth of politicians.