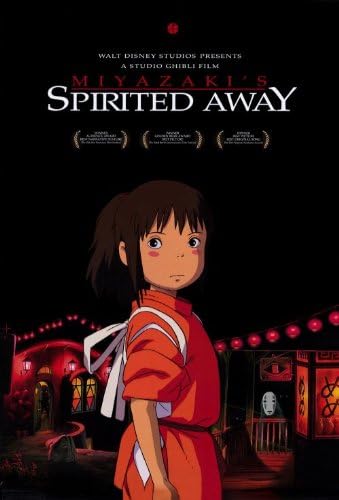 Ever since I began this journey through the catalog of Studio Ghibli films, I have been looking forward to one particular film.  Spirited Away has been spoken of with such reverence that I have really anticipated reaching the film in the watch.  Today was the day.

I was very excited to watch Spirited Away this morning, though I did approach it with some trepidation.  The word of mouth had been so overwhelmingly positive that it threatened to raise my anticipation levels too high.  Would Hayao Miyazaki’s reputed classic be able to reach the levels of my expectation?  It would not be the first movie that I went into with high expectations only to come out shrugging my shoulders.

That was not the case.  Spirited Away is a masterpiece.

During her families move, unhappy 10-year old Chichiro and her parents got lost and discovered a deserted amusement park.  Before too long, Chichiro learned that there was more to the amusement park than you could see.  There was magic and a world of amazing creatures.  Chichiro investigates the area as her parents hungrily eats food at a local establishment.  When she meets a young boy named Haku, she is warned that she and her parents need to get out of the place before nightfall.  Rushing back to them, Chichiro finds that she was too late and that her parents had been transformed into pigs, forcing the young girl into a world of mystery.

As with all Studio Ghibli films, the animation here is amazing, but this film takes it to another level.  The character design on every creature, character or setting is utterly breathtaking and is filled with such specific details and stunning imagery.  The characters creation informs you about the characters brilliantly, presenting both sides to these complex characters.

There are some of the best characters that I have seen yet in this series of movies, including the bathhouse owner Yubaba is a marvelous construction of imagination and creativity.  Haku and his other part fits right in with the Japanese ideals and he is a beautiful design.  Lin is another great character who helps Sen, the name given to Chichiro by Yubaba as a way to control her.  No-Face is a spirit that comes into the bathhouse and seems to be a kindly spirit…until he was not.  That moment when No-Face turns completely shocked me and created a remarkable uneasiness in my mind.

Spirited Away reminded me immediately of The Wizard of Oz, as that film seems to share many of the same themes.  Both have a young girl as the main protagonist.  This young girl finds her way to an odd and magical world where she is just trying to return to her own life, trying to avoid the witch who has power around the land.  I have also seen people understandably connected it to Alice in Wonderland.  I saw Dan Murrell review this film and he said that the parents into pig scene reminded him of the kid turns into a donkey scene from Pinocchio.   These nods to the classics of children’s fantasy and literature create a richness in the story telling that helps flesh out everything for Spirited Away.

I love the character arc for Chichiro, as she starts as a fearful and depressed girl who whined a lot into a brave and heroic figure you goes out of her way to help the people that she cares about.  You can see how Sen grows with each situation she finds herself in.

For such a hyped film, Spirited Away paid off big time.  I loved this so much and it was a masterful animated movie like few that have ever came out.  A beautiful epic.