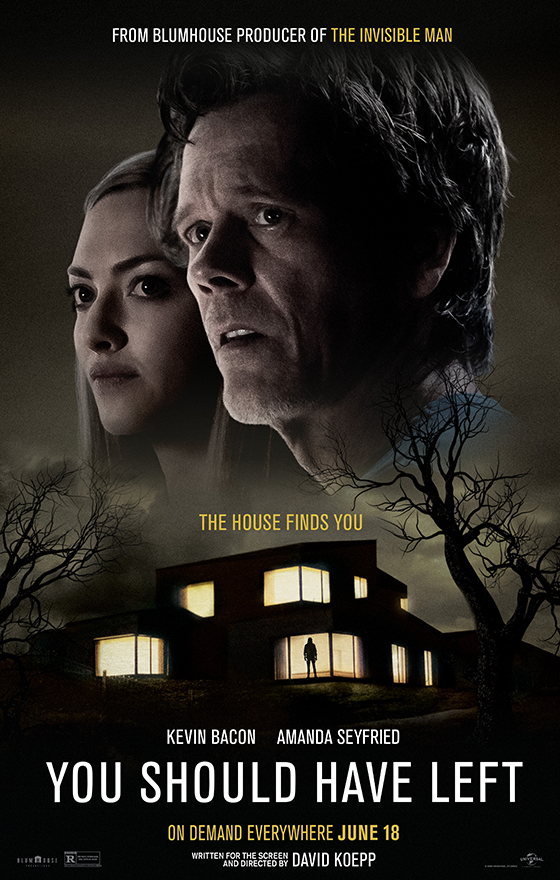 You Should Have Left is a film released this year on VOD.  However, I had heard some negativity about the film so I decided that I would not pay the $19.99 they were asking on Vudu and the other video on demand sites.  I thought that I might come back to it later as the price dropped.  Tonight, the price was much more reasonable and I gave this a try.

Perhaps it is because my expectations were low, but I liked a lot of this movie.  It clearly has its flaws, but this was much better than I thought it would be.

Theo (Kevin Bacon), a former banker, his wife and actress Susanna (Amanda Seyfried) and their daughter Ella (Avery Essex) need to get away from the world.  Theo had a dark past that haunts him and the chance to get away with his famous actress wife and daughter.  They rent a house in the Welsh countryside, and then things start to get weird.

This is in the genre of haunted house horror and comes from Blumhouse.  The recent run of Blumhouse films have not been as rewarding as others.  Directed by David Koepp, You Should Have Left takes that genre and, well, does not do anything really new with it.  Still, the house itself was kind of creepy and had some solid scenes in it.

Kevin Bacon is great with what he has been given.  Young Avery Essex is very capable as well.  Amanda Seyfried is not given much to do.  Because of the lack of depth in her characters, a plot point that is dropped near the end of the second act of the movie feels just completely shoehorned in and was unearned.  It was so out of left field that it hurt the movie that I had been enjoying to that point.

The ending of the film was also too predictable.  It presented a twist to it that you probably guessed way earlier in the movie.  The movie missed an opportunity to do something creative with the end that took advantage of the skill of these actors involved, but it chose to do the typical stereotypical twist.  Much of the final act brought the film down for me.

That is a shame, of course, because there were quite a few point among the first two acts that I had really engaged in.  The acting was strong, especially from Bacon and Essex.  The house had a creepiness to it that could have been something special, but seems to settle for something simple.

I was entertained by the film, which in the end is an important part, but this could have been so much better.  If you like horror movies and approach this with the proper level of expectations, you could do worse that You Should Have Left.