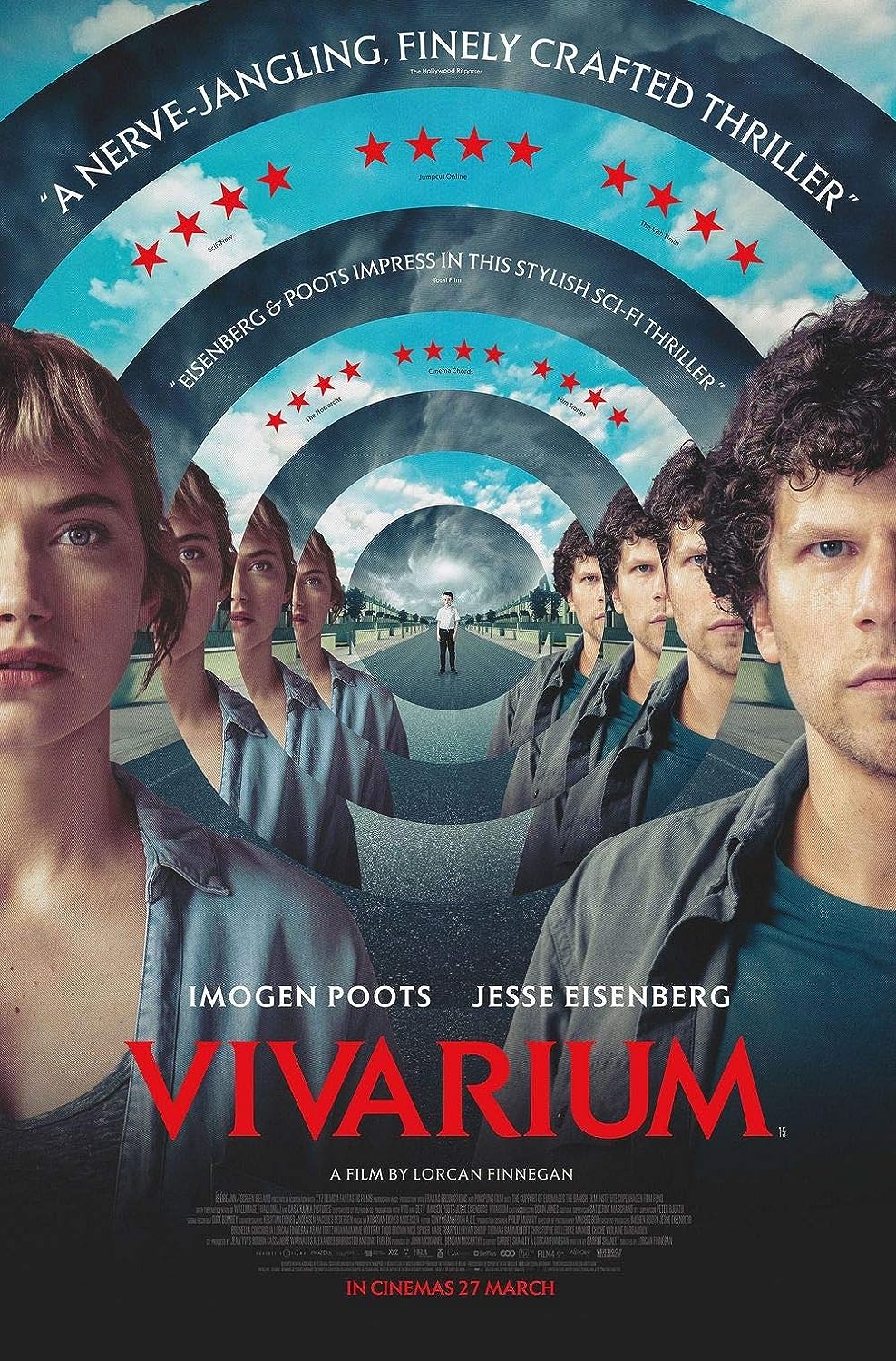 I came across this sci-fi/thriller on Amazon Prime this morning and I thought I would give it a shot.

Tom (Jesse Eisenberg) and Gemma (Imogen Poots) are a happy couple in search of their perfect house.  They go to see an agency that is selling houses in the neighborhood called Yonder.  The sales agent Martin (Jonathan Aris) takes the couple to see one of the houses, and they discover that the neighborhood is repetitive houses, all green, as far as can be seen.

As they are looking around, Martin disappears and the couple decide to get the heck out of there.  However, they are unable to find a way to leave and their car somehow always winds back at house number 9, the one they have been shown, as if trapped in a maze.

Finding a box of supplies left out front, Tom decides to try something drastic.  He takes the flap off the box and lights it on fire, torching the house in the process.  As they watch the house burn, the couple fall asleep out front. The next morning, another box appears, this time, containing a baby.  They also find that the house is completely unharmed from the previous night’s arson.

Time passes and the baby grows into a young boy (Senan Jennings), but there are clearly some weird things going on.  Yet, there is no way for Tom and Gemma to escape, so they continue with their life.  The passage of time is very odd in this film as we see that this boy is growing at a considerable greater rate than we would expect.  He seems to be copying the behaviors and speech of the adults.  They have not taken the boy into their hearts as a son as Gemma continues to tell him that she is not his mother.

Things only get weirder from this point on as Vivarium follows this couple’s life.  Wondering what the title was a reference to, I found this definition at Dictionary.com: “a place, such as a laboratory, where live animals or plants are kept under conditions simulating their natural environment, as for research.”  This definition certainly places a new thought about what this movie is all about.

The film also begins with the imagery of a bird’s nest with newly born birds being shoved out of the nest, leading to their death by a cuckoo.  The bird’s mother then raise the cuckoo as their own.

Again, pretty spot on with what is happening in our narrative.

I thought the performances of Jesse Eisenberg and Imogen Poots were well done.  They showed the horrors of the situation without going overboard.  The performance of Senan Jennings was stand out though.  The “young boy” (which is the name IMDB gives the character) is one of the creepier performances you are going to find.  He fits nicely into the genre of horror movie creepy kids.

The middle of the movie is a tad slow, but I liked that.  The development we got was well done and frustrating because you just did not understand what was happening at the time.  There were enough clues dropped throughout the film that made you realize that something was seriously out of whack that it teased the audience effectively.

I personally enjoyed the ending of the movie, but if you are the type who gets frustrated about having everything explained to you, then this one may not be the film for you.

There are some extremely relevant themes of isolation and the repetitive of life in this film that may not be developed as much as it could have been, but they are certainly there.

Vivarium is a cross between an extended episode of the Twilight Zone and Twin Peaks.  There are some really weird events and some great performances, especially from Senan Jennings.  Some may not be happy with the ending, but I thought that worked well for the themes that they were using.