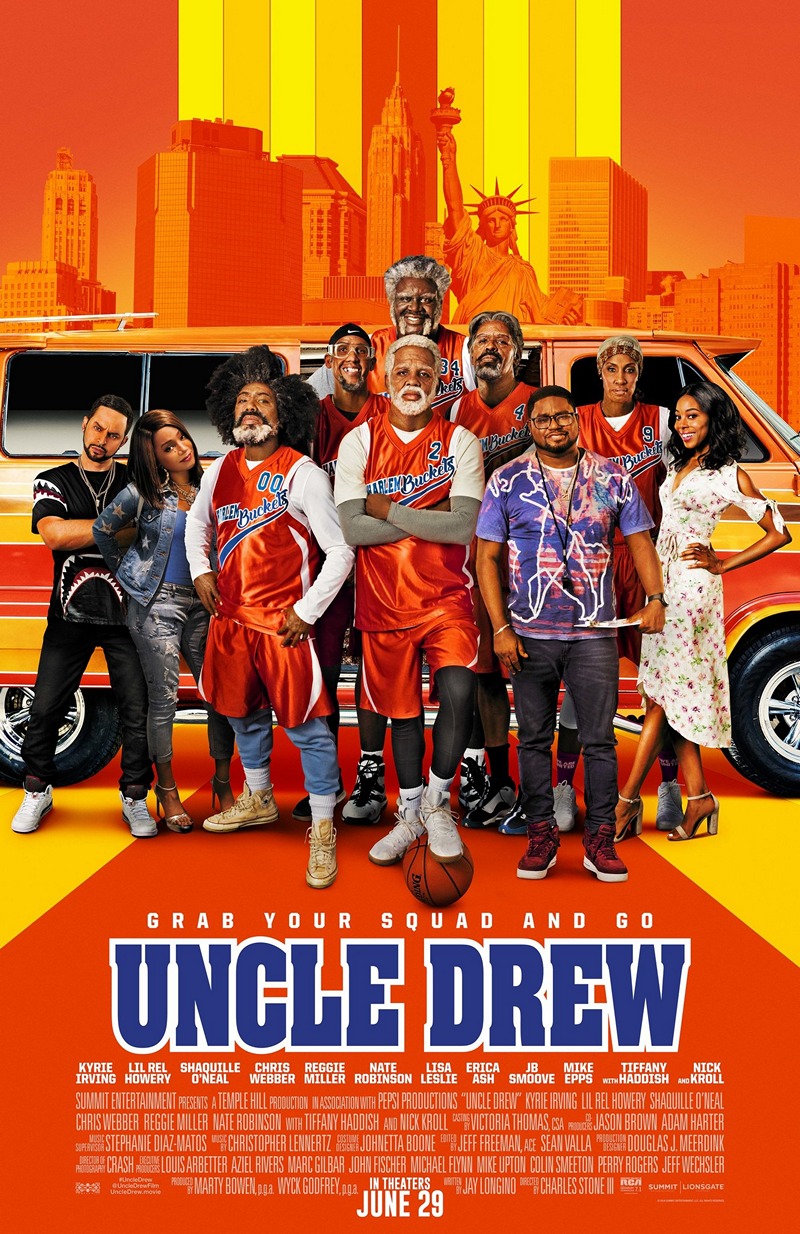 Was not looking forward to Uncle Drew.  I thought the trailers looked horrible for this movie.

And yet, it was okay.

Dax (Lil Rel Howery) is a basketball coach preparing for the Rucker Classic street ball tournament in Harlem and he has drained his life savings into getting his team prepared for the games.  He has a stud player Casper (Aaron Gordon) whom Dax is pinning his hopes on to bring home the $100,000 prize money.  However, when childhood rival Mookie (Nick Kroll), who had ruined Dax’s childhood with a dramatic blocked shot, steals away Casper, Dax becomes desperate.

With no money, no team, no girlfriend (Tiffany Haddish), Dax did not know what he was going to do.  He ends up at a outdoor street ball court where an old man is criticizing the young players for their lack of playing the game right.  The young kid called the old man out, and the old man just toyed with him for awhile before beating him handily.

The old man was the street ball legend Uncle Drew (Kyrie Irving) and Dax sees his opportunity.  Uncle Drew agrees to play at the Rucker Classic, but only if he could bring in his team from the past.  Dax agrees and they go about bringing in the crew.

None of these NBA players are good actors, though I have to say that I really thought Shaq was decent in here.  Shaq himself in the ending credits says that he had come a long was from Kazaam, and I agree with him completely.

The fact is that this is not the greatest movie of the summer by any stretch, but it has some good moments and has a surprisingly large heart.  Is it predictable?  Yes.  Is the story strong?  Not really.  Does it require some eye-rolling suspension of disbelief?  Absolutely.  I already mentioned the acting.  But there is just something about the film that makes it likable.

There is a very positive message about the power of basketball that can be used in many different situations.  The theme of “if you give up what you love, your life is not what you want it to be” really works here and does not have to specifically include basketball, despite that basketball is what these characters all love.

I think if you are a fan of the NBA, you will absolutely enjoy Uncle Drew.  Sure the product placement is all over the place (Pepsi, Aleve, ESPN etc) but there is nothing that really slaps you in the face.

Sure I knew where this was going, but there was a certain charm in getting there.  It has a great message about friendship and family and never giving up what you love, and even though it is absolutely formulaic, Uncle Drew was enjoyable enough, more enjoyable than this had any right to be.