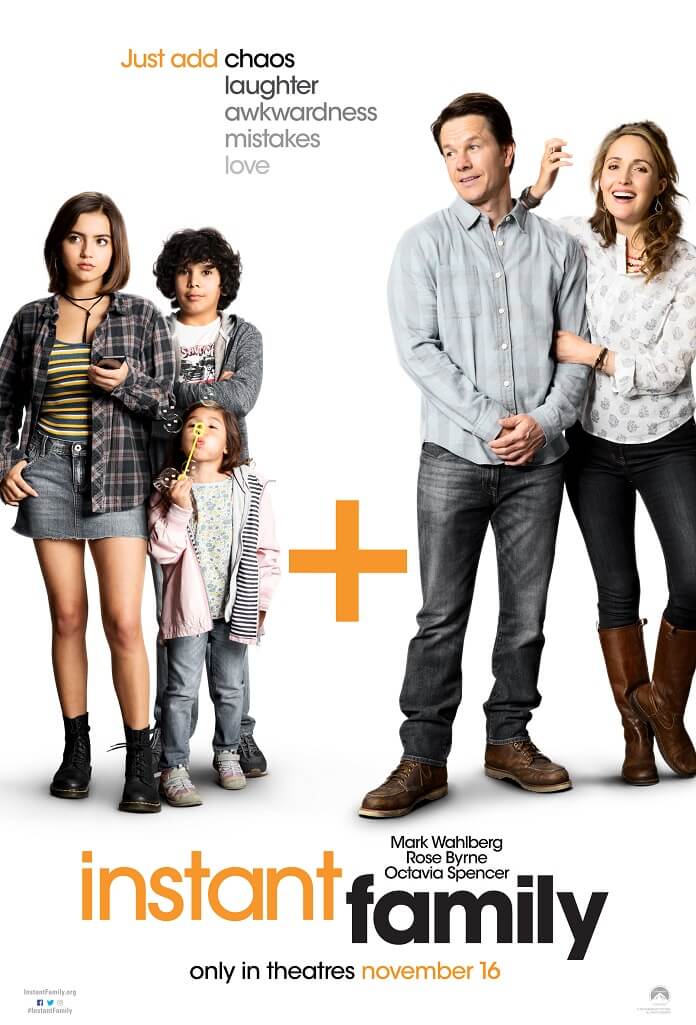 I saw a review of this movie on Collider Movie Review Talk by William Bibbiani that summed up this movie with one perfect word:  “Lovely.”

That word from Bibs was the ideal word to describe Instant Family, which has a ton of heart, some wonderful moments of emotion and some great family drama.  And it had a bunch of humor that fit right in with the tone of the film.  It was not a “Daddy’s Home” type film that is was marketed as.  It was heartfelt and the humor was real.

Pete (Mark Wahlberg) and Ellie (Rose Byrne) are a married couple that find that they are missing something and they decided to become a foster family with the idea of adopting.  After meeting a fiery teen Lizzy (Isabela Moner), Pete and Ellie are intrigued.  However, Lizzy comes along with a brother Juan (Gustavo Quiroz) and sister Lita (Julianna Gamiz) and the trio is a handful.

I truly expected this to be an entirely different type of movie, but this turned out to be an exceptional film. The acting was spot on.  Mark Wahlberg and Rose Byrne had an easy chemistry and made a real, loving couple.  Young Isabela Moner is a future star.  She was tremendous as the troubled teen.  She shone every minute she was on screen.

Octavia Spencer and Tig Notaro were great together as the social workers assigned to the case of Pete and Ellie and the kids.  They were both entertaining and funny while delivering an important message.

Of course, the message of how important it is to have foster parents is very  vital, but, at times, heavy handed in the movie.  I mean, the film ends with a web address to help provide info for those wishing to adopt children in the system.  It felt too much like an infomercial during the film.  It is not a major issue, but it was noticeable.

In the end, this was a highly entertaining and funny movie with a message worth giving.  There are strong performances and the film thankfully goes in a different path than you expect.

As Bibs said, “It was lovely.”