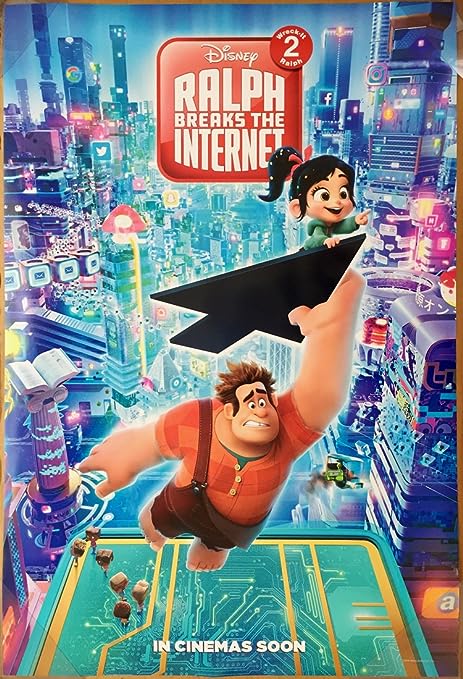 Disney has had quite the year.  With massive hits like Avengers: Infinity War, Black Panther, Incredibles 2, Christopher Robin and the upcoming Mary Poppins Returns, the company has had a ton of success in 2018.  You can toss the sequel to the hugely popular Wreck It Ralph animated film on the pile of money as well.

Not only is this film going to make a ton of money, it is a really quality movie as well.

We find Ralph (John C. Reilly) and his best friend Vanellope (Sarah Silverman) going through their days in their video games and spending time with each other.  However, Vanellope was beginning to become bored with her repetitive existence.  When her video game get broken and the replacement part unavailable, she faces the possibility of it being unplugged forever.

Not so fast.  There is a part available on the internet site Ebay, so Ralph recruits Vanellope to come with him into the internet to attempt to purchase the replacement part before it is too late.

The friendship between Ralph and Vanellope is front and center in this movie, actually focused on the side of Vanellope more than Ralph.  One could make the argument that this is Vanellope’s movie.  She and Ralph head into the Internet and find their way into a Grand Theft Auto type game where they meet Shank (Gal Gadot) and engage in an epic animated car chase with her.  Gal Gadot is not in the film that much, but she is great as Shank when she is.

There are a lot of very clever bits throughout the movie, using the internet and its sites as fodder for jokes and character development.  Of course, the idea was done by the Emoji Movie first, but this is WAY better in their use of the Internet than that movie was.  Yes, there is product placement, but I did not hate it near as much as I did when the Emoji Movie used it.  I think the fact that everything was used for character development made this a far superior flick.

Taraji P. Henson appears as a new character named Yesss, a head algorithm and the heart and soul of the trend-making site “BuzzzTube.”  Alan Tudyk is here voicing KnowsMore, an internet search engine who appreciates the politeness of people.

As with the original, the animation is great, full of life and bright colors.  The third act was quite scary in its own right and the movie deals with some real deep themes.  It is considerably more deep than animated films such as The Grinch.  There is plenty for both adults and kids in Ralph Breaks the Internet.

There is also a powerful scene dealing with online comments that I won’t spoil but is very well done.

The guest appearance of the Disney Princesses is a highlight of the film and really cries out to be developed into more than just a cameo.  And speaking of cameos… our dearly departed master of the cameo makes a fun appearance here too.

Ralph Breaks the Internet waited six years before releasing a sequel, and it was worth the wait.  With films like this joining that growing list of great Disney successes, the studio can absolutely ignore the less than successful films (Solo, A Wrinkle in Time).