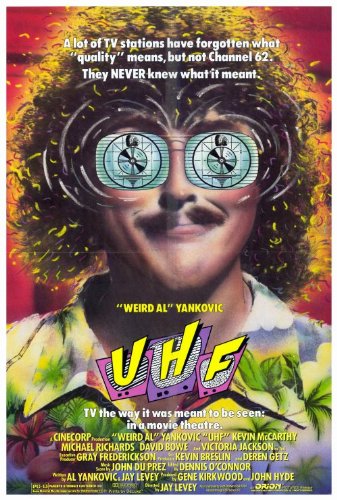 We move from boxing movies to spoof with the classic “Weird Al” Yankovic film UHF on the Thanksgiving binge watch.

Yes, UHF is very silly and borderline stupid, but it is, at many times, funny and there is no doubt that EYG Hall of Famer “Weird Al” Yankovic went all in on his film.

The movie’s plot is pretty basic.  George (“Weird Al”) is a loser and can’t keep a job.  When his Uncle Harvey (Stanley Brock) wins the deed to a UHF television station in a poker game, he lets George manage the station.  George puts on the strangest array of television programs ever seen.  With the discovery of janitor extraordinaire Stanley Spadowski (Michael Richards) as charismatic kid show host, Station 62 flies to number one in the ratings, drawing the ire of evil studio executive R.J. Fletcher (Kevin McCarthy).

There are many satiric shorts throughout the film including parodies of multiple movies such as Raiders of the Lost Ark, Rambo, and Gandhi.  There are commercials on the station for Spatula City.  The game show classic Wheel of Fish added to the station’s lineup.

There is so much bizarreness in UHF that you simply have to toss away your doubts and have fun.

Anthony Geary (formerly Luke Spencer from General Hospital) also appears as Philo, a character who could be the oddest of the bunch.  Especially when we find out the truth about him.

UHF features “Weird Al” Yankovic’s parody of Money for Nothing by Dire Straits.  He turns it into Beverly Hillbillies/Money for Nothing.  We also get Al’s title track, the classic UHF over the credits.  I would have liked more music in the show, but what we got was great.

Sure this is silly.  But it is a good time, no matter what.  UHF is one of those films that people look back on in a cult status.