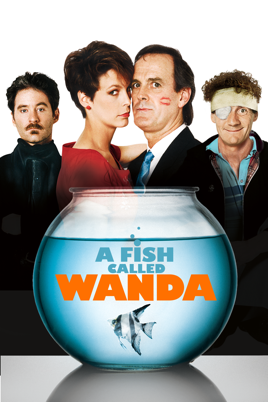 I have to say… this has been the biggest surprise of the 2018/19 New Year’s Eve/Day Binge-a-Thon so far.  A Fish Called Wanda was pretty boring.

I know, right? I didn’t see that coming.

I could not get into the film at all.  Sure they have a great cast and I thought that, when I saw the movie years ago I liked it, but watching it today, I just could not wait to get it over.

I know that I am distinctly on the minority side of this, but I just did not enjoy A Fish Called Wanda.  Just a glance had the score at 93% on Rotten Tomatoes.  EYG Hall of Famer Roger Ebert had given the film 4/4 stars.  The audience number on Rotten Tomatoes is 84%. Google users had it at 81%.  These are all very high numbers.

And yet, it goes to show that movies are subjective and it falls into the idea that everyone has their own opinions.  I did not like this movie, I found it mean-spirited and nowhere near as funny as I thought it would be.  Maybe it did not age well for me since my memory was that I liked it originally.

In the end, this will not be a film that I want to revisit again.