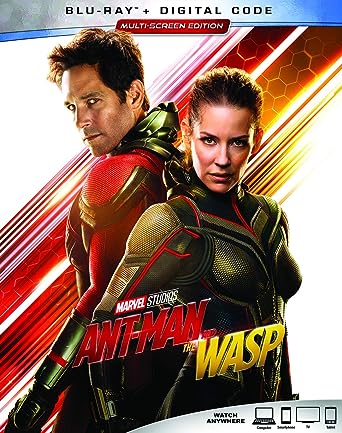 We are down to the final movie in the EYG MCU Rewatch, Ant man and the Wasp.  I am not including Captain Marvel as it is still in the theaters and it does not look like I will have the chance to get to it again before Thursday night and my viewing of Avengers: Endgame.  So this is the final rewatch.

Paul Rudd is excellent as Scott Lang, the somewhat bumbling hero who is under house arrest for his adventures during Civil War.  Evangeline Lilly is Hope Van Dyne, playing the Wasp.  Michael Douglas resumes his role as Hank Pym, Hope’s father and the original Ant Man.  These three actors really work brilliantly together and they are the biggest reason why this movie is as effective as it is.

The villain Ghost is one of the better villains around.  She is actually more than a villain as she is just trying to save herself from dying from her Quantum exposure.  Ghost may have a future in the MCU as a hero (Thunderbolts, anyone?)

This film was taking place prior to and during the events of Avengers: Infinity War.  Of course, there are some important things that happen here for Endgame, mostly in the post credit scenes.

The humor here works well and Paul Rudd never fails to deliver his lines in a funny way.  Paul Rudd’s imitation of Michelle Pfeiffer is a highlight of the film.   We also get more goodness with Michael Pena’s Luis and his way of telling the stories.

Pant Man and the Wasp was hurt by its placement in the year.  Marvel already had released Black Panther and Infinty War in 2018 and this film was smaller and more personal.  These characters are worth the time.