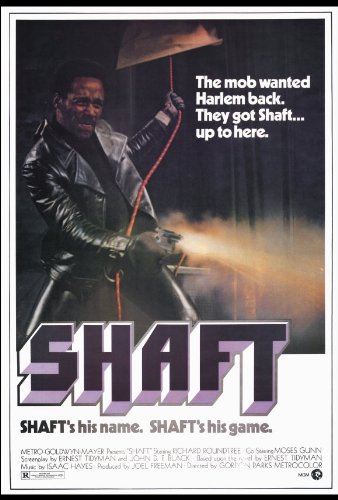 Who’s the black private dick
That’s a sex machine to all the chicks?

In just over a week and a half, there will be a third Shaft movie, starring three generations of the bad mother…  Shut your mouth.

The trailers look interesting with appearances by Samuel L. Jackson and Richard Roundtree.  I knew of Shaft, part of the blaxploitation genre in the early 1970s but I had never seen the film.  Nor had I see the Samuel L Jackson version from the early 2000s.  So I figured the time was right for a Shaft watch.

Can you dig it?

Richard Roundtree was the first John Shaft and he was a private detective hired to rescue the kidnapped daughter of a black mob boss.

The Shaft comparison to James Bond is fairly accurate as he is a womanizer, yet very suave.  Shaft is a jerk to be fair, but he had a certain charm and he gave his word, and it meant something.  Plus, he can be shot point blank and survive without any trouble.

The racial tones were apparent from the 1970s but the white police officer was shown to be a good guy.  The villains from the mafia were underdeveloped for sure.  The other black men from the black mob were not well used either, except for Ben (Christopher St. John).

The film was okay.  The music was tremendous.  The Shaft theme, which I already referenced, is just perfect for the film and the character.