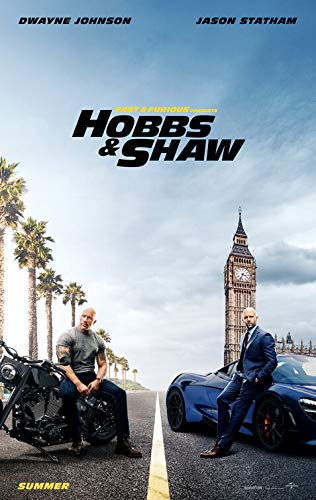 If you are going to Hobbs & Shaw, know the kind of movie you are going to see.  Do not expect a lot of depth (though there is some) and be ready to ignore logical thought.  However, none of that is bad because if you let yourself have fun, there is a lot of fun to be had with the first Fast & Furious spin off.

Luke Hobbes (Dwayne Johnson) and Deckard Shaw (Jason Statham) are recruited for a mission after apparent rogue MI6 agent, and sister to Deckard Shaw, Hattie Shaw (Vanessa Kirby) betrayed her crew and stole a deadly virus called the Snowflake.  Despite appearances, Hattie had not betrayed anyone and was being set up by the actual terrorist, Brixton (Idris Elba).  Brixton was a technologically enhanced human and he started searching for the virus.  Hobbs & Shaw’s unwilling partnership was put to the test by the “Black Superman” Brixton.

If you enjoyed the bickering of The Rock and Statham in the last Fast & the Furious movie, then this will be for you.  The chemistry between the two of them is easily the selling point of this spin off.  Their banter and arguing is funny, quick witted and entertaining.  I really loved Vanessa Kirby’s Hattie as well.  She was anything but a damsel in distress and she had a glow on the screen.  She is a star in the making and looked great next to The Rock.

The action pieces were fun and, perhaps, impossible.  Again, if you let a little thing like physics get in the way of an action/adventure film, then you should stay away from this.  I will say that some of the fights were filmed with too much shaky cam and were not clear to see.  I would have preferred some more crisp action imagery here during some of the fights.

There were several high profile cameos in the film that were wonderful.  I won’t spoil any of them, but the fact that they could be kept quiet was impressive for the film.  Especially since I feel as if they gave too much away in trailers.  There were several action beats that I would have liked to have seen for the first time in the movie instead of the trailer.

The film continued a theme of family, much like the Fast & the Furious franchise, as both Shaw and Hobbs had issues to overcome dealing with their families.  Neither had real deep moments, but there were a few nice moments that did not need to be included, but helped give us some flavor about these two characters.  In particular, seeing some of the Samoan heritage for Hobbs was cool.  Admittedly, Joe Anoa’i (known in WWE as Roman Reigns) does not have much of a role here (as a real life cousin to Dwayne Johnson) as he lacks any dialogue.  Anoa’i was there to do some of his WWE movies during the third act fight scenes and he looked good doing that.   Meanwhile, there was a nice couple of scenes with Johnson and Hobbs’ estranged brother Jonah (Cliff Curtis).  Dwayne Johnson has some chops in him and I do believe he has some dramatic movies in his future.  You can see a glimpse of that here.

I loved Lori Pelenise Tuisano, who played Hobbs’ mom.  She brought that tough Samoan matriarchal  presence that you can see in the culture.

Idris Elba is always great, and this is no exception.  He was Terminator-like as the technological enhanced Brixton and looked to be a bad ass enough to take on both Hobbs and Shaw.

There are also several fun mid/post credit scenes that you want to make sure you stick around for.

Everybody in this film knows exactly what kind of film it is and they all play right into it.  Hobbs & Shaw has charm and excitement and some great implausible action scenes.  This is a great popcorn movie for the end of summer and anyone criticizing it for not being more does not understand the franchise.  It is okay just to go to the movies for some escapism and Hobbs & Shaw provide plenty of that.  This is also as close to the WWE version of the Rock that Dwayne Johnson has ever come on the big screen.