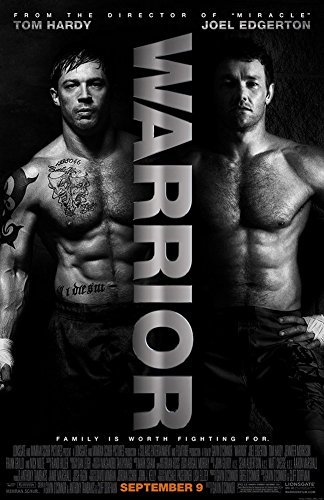 I actually avoided this movie for quite awhile.  I have never been a fan of the UFC and this just seemed like nothing more than an overblown ad for them.

However, there was much more to Warrior than that.

I heard lots of people online whose opinions I respect say that Warrior was one of their favorite movies and so I decided to give it a chance and rent it off of Vudu.  Yet, I rented it and it sat in my queue for almost a month.  In fact, I almost forgot that I had it available.  The rental period was almost over when I finally decided to watch the movie.

By the end, I had tears in my eyes and goosebumps all over my body.

Warrior is the story of two estranged brothers who both wind up in a huge UFC tournament called Sparta.  One brother, Brendan (Joel Edgerton) was a science teacher who needed to do something drastic because he needed money.  He had been a fighter early in his life and gave it up for his wife (Jennifer Morrison).  The second brother Tommy (Tom Hardy) was a Marine who deserted his unit, but came across another unit where he saved someone by ripping the door off a jeep.  Changing his name, Tommy had to deal with his own inner anger from the life he had lived.

Their recovering alcoholic father (Nick Nolte) was estranged from both and wanted to reconnect with his boys.

There was so much emotion in this movie.  You could feel the anger of Tommy and the desperation and determination of Brendan.  It was pretty obvious that these two brothers were on a collision course with one another, but once you get to that point, anything could have happened.

The film was filled with awesome performances from everyone involved.

Of course, Warrior is to the UFC as the Rocky series is to boxing.  The matches in this movie are way more exciting to watch than the ones that are actually presented in the real UFC just as boxing was never as exciting as when Rocky was punching one of his foes.  There may be moments within a match that elevates to this level, but these are thrilling from the start.

I am glad that I was able to make time to watch this movie before my rental period ended.  It is a wonderful film worth the watch.