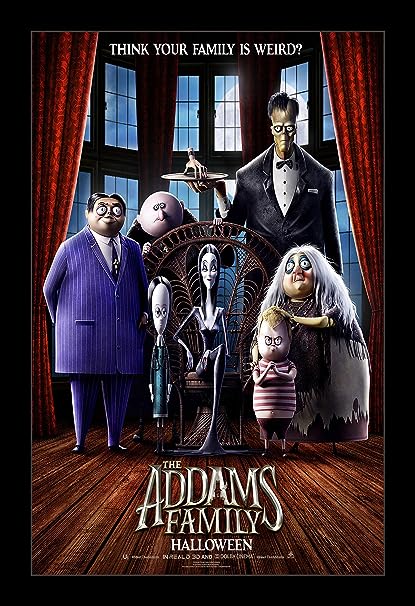 With full disclosure, I fell asleep during the third act and missed the ending of this movie.  Not necessarily a great sign for my thoughts on the new animated version of the old TV show, The Addams Family.

So I am going to proceed with this review without having any idea how the film turned out.

Of course, I could probably guess and not be too far off.  This film was less than groundbreaking.

The Addams family moved into a new neighborhood, into an old, abandoned asylum with ghosts and living trees.  Just what they were looking for.  Then, a woman from a TV home repair show wanted to “fix” their home so their presence did not affect the selling of other houses in the area. Meanwhile there were a bunch of other side stories that ranged from inane to mildly entertaining.

The plot was slow and dull.  It had several storylines that were not what I had hoped to see.  The aforementioned home repair show featuring the film’s main villain, Margaux Needler, is the worst of the bunch, which is saying something since the whole Pugsley-has-to-do-Addams-family-fencing-dance to become a man storyline was cringe-worthy.  The only storyline that was, at all interesting, was Wednesday and trip to middle school.

However, my favorite part is clearly Lurch.  This character is the break out character of the film,  with his organ playing being the highlight.

There were a few gags that drew a giggle out of me, but it became pretty clear that this film was not targeting me.  It was made for the little kids.  Problem was that I am unsure if it is exciting enough for the short attention spans of children.  I have a feeling The Addams Family will bore the kiddos rather quickly.

There are some dark moments in the film, but no where near the recent live action films, which are both considerably better than this.  The characters are introduced to the new audience, but I am not sure that we learned enough about them to care.

I wish this were a better film.  It is not as bad as some, but it could have been much better.