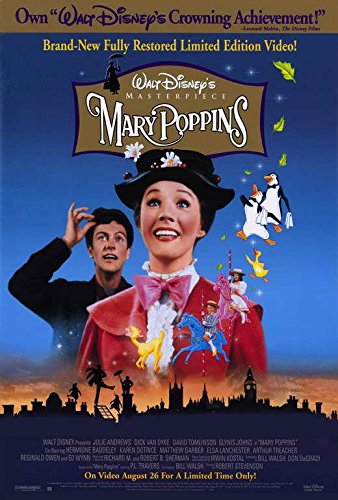 Browsing through the movies available to choose for the Disney Plus Binge, I saw that the lovely Mary Poppins Returns was available, and I thought, what a better film to continue the binge with than the original classic, Mary Poppins.

Based upon the book series by P.L. Travers, Mary Poppins is filled with music and dance, animation mixed with live-action and some of the cleverest writing on screen.

Mary Poppins arrived because of a need in the Banks family.  At first glance, it appeared that Mary Poppins was there to help save the children, but in the end, we learn that she was there to bring Mr. Banks (David Tomlinson) back into his family with his children.

The music is splendid and I can remember as a child being thrilled with it.  I can remember having “supercalifragilisticexpialidocious” as a spelling word.  The dance routine of the chimney sweeps in “Chim Chim Cheree” and “Step in Time” is a masterpiece.  Julie Andrews shows off her beautiful voice in what was her feature film debut in which she would win the Academy Award.