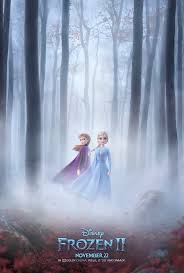 I was not a fan of the first Frozen film from Disney.  I did not hate it like some did, but I found it to be a movie that I had trouble connecting with.  It had a great song in “Let it Go” no matter what you think.  Frozen was a massive hit though and it was clear that it was going to receive a sequel.  Would the second film be a better film or would I like it even less?

I am happy to report that I found Frozen II to be a much better movie than the original.  I am not sure if there is a song in the film as good as “Let it Go” but “Lost in the Woods” comes close.

Frozen II brings the audience back to the sisters Elsa (Idina Menzel) and Anna (Kristen Bell) as the days continue on in Arendelle.  However, trouble strikes again after Elsa begins to hear a strange voice singing from the Enchanted Forest.  The crew of heroes started off in search of the source of the voice and trying to discover how it was connected to Elsa.

Frozen II has utterly beautiful animated scenery that could be real, actual images.  There are some times when I am not sure if the background were actually real images or if it were indeed animated.  Frozen II was a special movie when it came to the pictures on the screen.

The characters are more interesting this time around because we knew more about them and we have already developed our connections with them.  While Olaf (Josh Gad) is still hit and miss for me, he does a Frozen plot recap that is hilarious and one of the highlights of the sequel.

There are some good action involved here as well as our heroes moved into the Enchanted Forest to discover the truth behind the elements.  There are some creative character designs in these characters that fir very well with the rest of the crew.

However, the lack of a real villain does hurt the film and the ending was okay, if not a tad anti-climatic.

Above all else, I enjoyed this one more than I did the first one and the animation is as gorgeous as it can get.  It should be another huge hit for Disney.