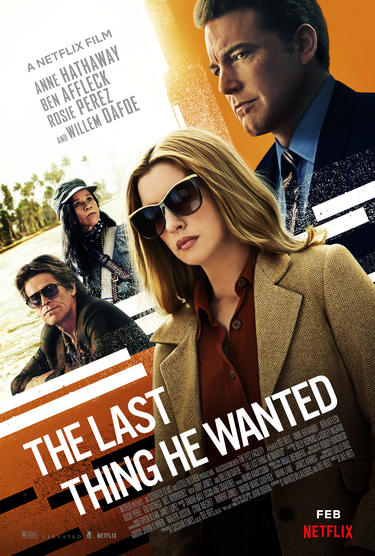 I discovered this on Netflix this weekend and saw a cast of very impressive actors. I mean… Anne Hathaway, Ben Affleck, Willem Dafoe, Rosie Perez, and Toby Jones are all some of the greatest actors working today.  It makes one wonder how this film, which should have been truly successful as a political thriller,  went so off track with such a top flight cast.

But The Last Thing He Wanted, based on the novel of the same name by Joan Didion, was convoluted and confusing.  The story kept having events happen that make little sense and made the narrative difficult to follow.

Journalist Elena McMahon (Anne Hathaway) walked off the presidential coverage she had been assigned to follow in order to help complete her sick father’s (Willem Dafoe) business deal, which was dealing arms to Central American countries.  She suddenly found herself over her head, involved in the very story that she had been trying to reveal prior.

Set during the heart of the Iran-Contra Affair, Elena’s motives were not always clear.  Was she doing this for her father?  Her daughter?  The story?  Her country?  None of it is clear.

Anne Hathaway is solid in the role.  Ben Affleck, who played Treat Morrison, a government official who becomes involved with Elena.  Willem Dafoe is probably the most interesting character in the film, but the end results of his character arc is disappointing and occurs off-screen.

The end of the film is messy and sloppy.  It hardly is worth the time that you have to put into the story to understand what is going down.

I find it difficult to believe that Elena is any sort of international journalist.  She seemed fairly lacking in skills.  I would think a journalist of this caliber would have a few more tricks up her sleeve.

This was a pretty disappointing film.   I certainly expected more when I saw who was involved.