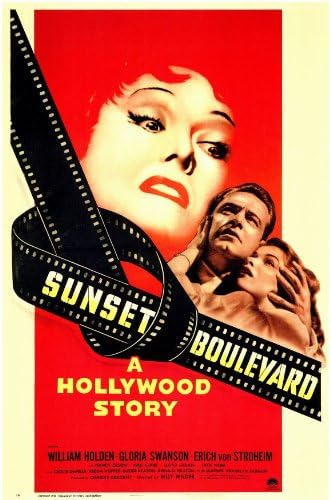 One of the most iconic quotes in the history of movie making can be found in Billy Wilder’s all-time classic Sunset Boulevard, the next film on the Social Distancing Binge-A-Thon.

This is another iconic movie that I had never seen before, but know a little about.  Obviously, I was aware, as any cinephile is, about the scene that ends the movie with aging actress Norma Desmond (Gloria Swanson) descending her staircase through a throng of people.  I had little to no context for the scene, I just knew it existed.

Sunset Boulevard tells the tragic story of struggling writer Joe Gillis (William Holden), who accidentally comes across Norma’s run-down mansion one day, starting up a relationship with the starlet as a companion.  Norma is desperate to make a return to the big screen and has Joe work on a script that she had written.

Norma’s mental status was questionable as she seemed delusional at times and had been shown as suicidal as well.  She was happy with the relationship with Joe and with the chance of her script being directed by Cecil B. DeMille, a director she had worked with in her heyday.

The movie was wonderful.  There was dark humor, depressing moods, and plenty of drama.  It was very similar to the noir films, as we hear Joe’s voice over as the movie progressed.   The film grabbed me immediately with a body floating in the pool, which I had not expected.  It then took a flashback to tell how the story had gotten to this point.  I was fully enthralled from the very beginning.

There were a bunch of cameos from famous people playing themselves, including Cecil B. DeMille, gossip columnist Hedda Hooper, actor Buster Keaton, Anna Q, and H.B. Warner.

Sunset Boulevard is one of the best films about Hollywood ever made and presents the negatives toward the lifestyle even more than the positives.  Norma Desmond was driven mad by her longing for the screen and her life was filled with excesses and money that simple could not fill the hole in her heart.  She desperately tried to hold on to love and the idolization that she had lost and brazenly ignored the realities facing her.

“No one leaves a star. That’s what makes one a star.” Norma Desmond, a character practicing social distancing for a whole different reason.