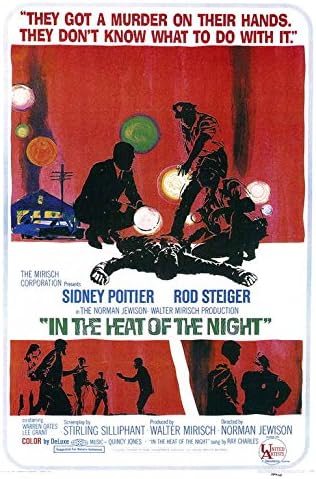 I had a friend who would use that line while we were gaming and, at the time, I did not know where it was from.

Of course, I found out.  In the Heat of the Night was a successful film during the sixties and was developed into a television series in the eighties.  As I was looking through the Amazon Prime list, I came across the original movie from 1967 and thought this was a good chance to see it.

Virgil Tibbs (Sidney Poitier) was a homicide detective from Philadelphia who was traveling through the south.  While waiting for a train to take him back to Philly, he was picked up by local police on suspicion of committing a murder of a wealthy local businessman.

Of course, the only reason he was picked up was because of his skin color.  He was in Sparta, Mississippi and African-Americans were not exactly welcome, let alone a well dressed, intelligent man with a wallet filled with cash.

They brought Virgil to the office of Sheriff Gillespie (Rod Steiger), who discovered that Virgil was a police officer and that he was a homicide expert.  Gillespie asked Virgil to look at their case, but pressures from the community tried to get Gillespie to run Virgil out of town.

This was a very engaging movie to watch, but it was also quite difficult.  The people portrayed in this movie from Mississippi were about as backwoods as you could get when it came to their thoughts and actions toward a black man, especially a black man as successful and intelligent that Virgil was.  Watching the hatred displayed by the locals for no other reason than his skin color was disturbing.  The attitude of Gillespie was not too much better, to be honest.

The cruelty made me really want to see Virgil lash back at these racist humans, but he did not engage with the hatred.  You could see how he wanted to respond, but staying stoic was a much better choice.  However, he was not shown as being perfect either.  There was a suspect in the murder that Virgil was convinced was guilty because of his own personal feelings, and, when he realized his own biases, the case was able to get broken open.

The film also made me wonder just how many people were arrested in the south during the 1960’s just because it looked like they could have done it and that there was pressure to solve a case.

Sidney Poitier and Rod Steiger were amazing in the movie.  Steiger won an Academy Award for his role and it won for Best Picture.  Quincy Jones’s score was another major piece of the film, creating an atmosphere of uneasiness.

This is a hugely important film taking on the concept of race in the south.  It is also a highly entertaining and thrilling movie.