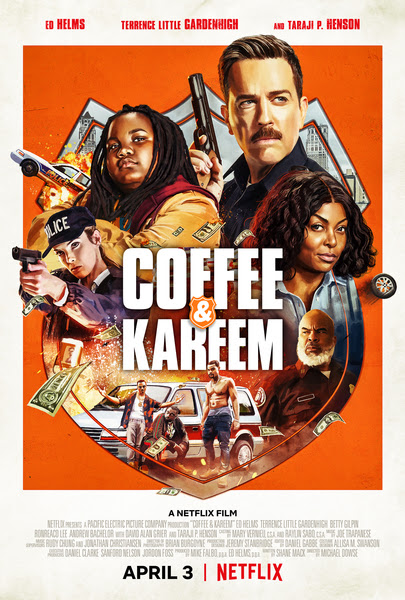 There is a new comedy that popped up on Netflix recently.  It is called Coffee & Kareem.  It is an odd couple movie featuring Ed Helms as a police officer who gets involved with a foul mouthed son of his girlfriend.

Barely competent cop James Coffee (Ed Helms) is in a relationship with Vanessa (Taraji P. Henson), whose 12-year old son Kareem (Terrence Little Gardenhigh) is a foul-mouthed kid who doesn’t want any part of Coffee the police officer in their lives.  As Kareem tried to get Coffee out of their lives, he accidentally gets them involved in a drug enterprise.

First of all, I hated the way that the Kareem character talked and how the movie glorified it.  The movie constantly showed that the kid was right and his behavior was excused or even shown to be the way it should be.  It was obscene and offensive.

Second, the story was ignorant and totally unrealistic.  The kid was going to hire some people to “paralyze” Coffee because he was sleeping with his mother.  Coincidentally, they walked right in to the middle of the case Coffee had been involved in.  The other characters in this movie, especially the villains were completely over-the-top and ridiculously played.

Ed Helms had some decent moments, but his character and the arc he went through was so painfully predictable that there is practically no reason to watch it.  The relationship with Helms and Gardenhigh was not believable either.  I felt little connection with the pair until the very end.  Then the switch came too suddenly.

Why did Helms want to be with Taraji P. Henson?  I don’t know because they did not seem to have any chemistry and I saw little reason for either of them to have any connection whatsoever.

The film was just too loud and bombastic.  There was nothing worthwhile in the story, the bad cops were so obvious and the events to get to the conclusion were dumb.  The scene with Kareem driving a car, using a handgun, etc were all just stupid.

There was nothing that was funny here.  I have said it before, but funny can overcome plenty of mistakes in a movie. The humor here was so lacking and dumb.

I have already talked more about this one than I should have.  It is a bad movie.