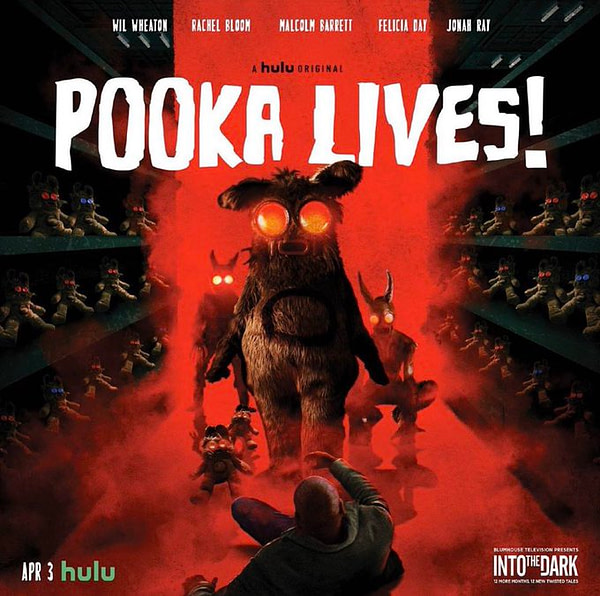 At least, I loved Pooka Lives!

This is yet another film (although it looks as if it is a TV episode of a series called Into the Dark) talked about by Critically Acclaimed (William Bibbiani & Witney Seibold).  Pooka Lives was on Hulu and, apparently, it was a sequel to another film/episode called Pooka.  I have not seen the original, but, fortunately, you do not have to have seen Pooka to enjoy the follow up.  In fact, apparently, the film takes the franchise into a much different direction.

A group of adults who were childhood friends create their own Creepypasta as a joke, but the internet meme goes viral and creates a monster that starts to kill those who are naughty.

Derek (Malcolm Barrett) was a writer whose book called out online YouTuber Jax (Motoki Maxted).  Jax sends his millions of followers after Derek, ruining his life.  Derek heads to his hometown to hide out from the snarks.  He goes to his high school friends’, Matt (Jonah Ray) and Molly (Felicia Day), house to stay for awhile.

At Derek’s welcome back party, Matt, Molly, Derek, along with Derek’s old flame Susan (Lyndie Greenwood) and police officer Bennie (Gavin Stenhouse) come up with the Creepypasta and send it out on the internet.  Nothing hurt, right?

Wrong.  The story they loaded goes viral and, through the power of belief, leads to the accidental creation of this monster, based on a toy, a toy of which is preparing to have a relaunch soon.

Malcolm Barrett is great here, playing this silliness nearly straight, adding to the tone.  Felicia Day is fantastic as always as Molly, the crystal-using, mystical believing housewife and the relationship with Matt is both filled with conflict over their differing beliefs but also their true connection.  This is a real couple and I really enjoyed their arguing.

This movie also has something interesting to say about internet culture and the way the trolls online can act horribly and be downright wicked.  The movie shows how the online trolls can affect the lives of real people in the real world.  This message may not be subtle but it is also not beating you over the head with it.  It is well done here.

Pooka Lives comes from the Blumhouse Television and is directed by Alejandro Brugués, a different director than who did the original film Pooka.

I really enjoyed this movie, way more than I ever thought that I would.  There was a light, carefree tone to the film and has its share of campy moments.  The Pooka creatures are funny, but look to be mostly practical with their effects.  There are also some really scary imagery here, especially when Pooka’s big, overblown red eyes start to glow.

This is a lot of fun and I had a heck of a good time with Pooka Lives. Might be the best of the films that I have seen since the quarantine hit.