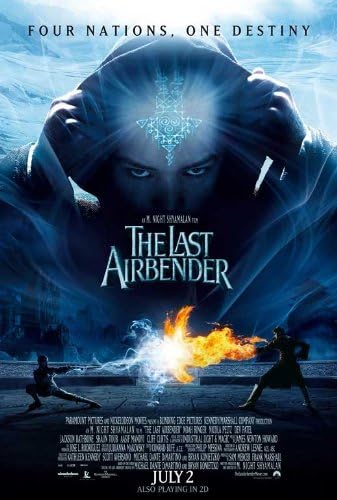 With the continual staying at home during the COVID-19 pandemic, it gives me an opportunity to finally watch what some consider to be one of the worst movies ever made.  I have never taken the time to watch M. Night Shyamalan’s infamous The Last Airbender.  Could it be as atrocious as so many people say?

Simply put… yes, it can be.

This is utterly horrific.

I was not a fan of the EYG Hall of Fame series, Avatar: The Last Airbender, but I can imagine that dedicated fans of that animated series could only look at this adaptation as an insult and a slap to the face.

I mean, there is nothing here that is good at all.  The acting is wooden and dull.  The dialogue of the film is some of the worst you are ever going to hear on a wide release of a big budget tentpole film.  The CGI and special effects are laughable.  I don’t know how many times I looked at the screen and thought to myself, “Hey, green screen!”

Dev Patel is in this mess.  He would eventually become a respected actor, but it had to have been a challenge overcoming this movie.  Both Kristen Stewart and Robert Pattinson had to work really hard to get past their roles in Twilight.  Fortunately for Dev there was only one The Last Airbender to get by.

Boring.  Ridiculous story and dialogue.  Acting?  Ugh.  CGI that was just not good.

It is amazing but everybody was right about this.  It was one of the worst things I have seen and it was utter garbage.  One of the rare films to receive this classification….