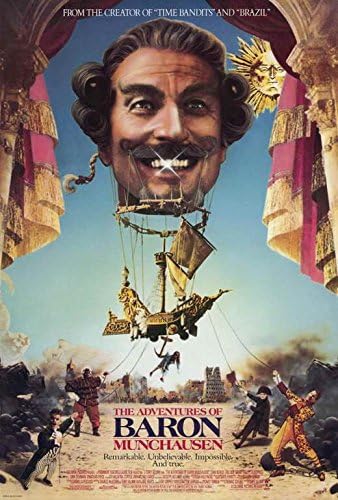 The Adventures of Baron Munchausen is a film from the weird mind of Terry Gilliam that follows the return to the “Age of Reason” of the heroic figure of German Baron Munchausen.  Munchausen returns, finding his adventures being portrayed in a stage play, and feeling the need to set the record straight.  Meanwhile, the Turks are attacking the city and the real Baron takes to the skies to try and reunite his old crew, with the help of a small child named Sally (Sarah Polley).

Despite the financial failings of the film, The Adventures of Baron Munchausen has become a cult classic.

The film is a masterpiece in visual imagery and special effects.  The costumes, makeup and design is off the charts, able to match the unbridled imagination of Gilliam.

The performances here are really great as well.  John Neville strikes the perfect chord as the over the hill hero who balances between who is his and the desire to let death claim him.  Eric Idle from Monty Python fame brings a chaotic humor, delivering, and receiving, some of the best one liners of the film.

There are some extremely notable cameos in the film as well, with Robin Williams, Uma Thurmon, and Sting showing up.

How much of the story is happening and how much of it is nothing more than the rambling of an old man?  The air of mystery at the end helps to put a fantastical spin on the conclusion to the film.

The Adventures of Baron Munchausen is not your typical movie and it is all the better because of that.