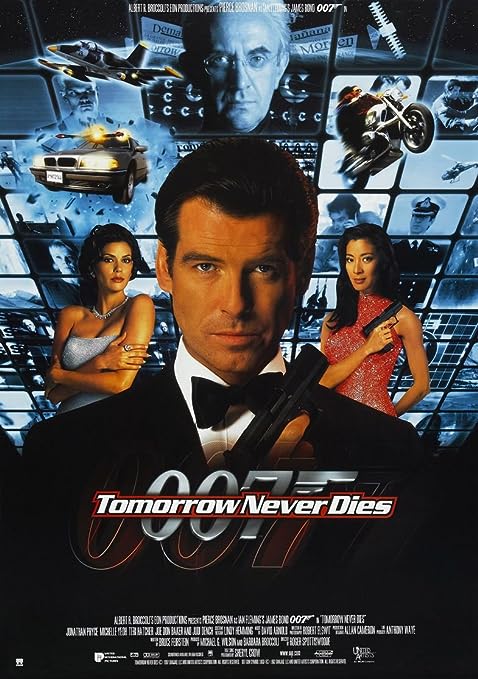 The nineteenth James Bond movie and the second with Pierce Brosnan is next on the Bond watch.  It is Tomorrow Never Dies, and after my personal disappointment with GoldenEye, I was wondering what to expect from this movie.

I thought this was an improvement over the previous chapter and that Pierce Brosnan felt more like he had that bit of Bond-ism that was missing from GoldenEye.

Now, I know this may not be a popular opinion, since the world seems to love GoldenEye considerably more than it does Tomorrow Never Dies (Rotten Tomatoes:  GoldenEye 77% and 83% [audience], TND:  57% and 53% [audience]), but I disagree.  I find these numbers extremely fascinating.

In this movie, Bond is back and this time trying to prevent World War III.  When media mogul Elliot Carver (Jonathan Pryce) tries to manipulate a confrontation between China and the United Kingdom in international waters all for the exclusive coverage, James Bond is on the job.  Teaming up with a Chinese agent Wai Lin (Michelle Yeoh), Bond tries to stop the news from being made.

I thought the general media powered plot was very relevant still today as it was 20+ years ago.  Maybe more so.  Jonathan Pryce was exceptional as the film’s villain and his crazed performance was very believable.  I was disappointed in the role given to Teri Hatcher, who played Pryce’s wife and former Bond flame Paris.  Her part of the story was quite limited and she was not vital at all.

I thought this was one of the most exciting cold opens the franchise has had in quite a long while.  The tension was high in the scene and led to a big win for Bond.  We also got a dose of Judi Dench as M here and that is always a welcome sight.

Tomorrow Never Dies does feel a little long and could have been better if they had dropped about 10-15 minutes in the middle of the film.  Still, I believe this is an improvement from the last Brosnan film.  However, word said that the final two Brosnan Bond flicks are pretty bad.  We’ll see.  I liked this one though it was not as popular.  Maybe my thoughts on Bond differ from others.