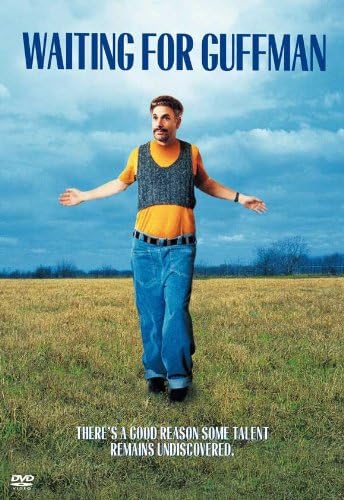 I do love Christopher Guest.

He has been involved in some of my all-time favorite movies.  From acting in the Princess Bride and This is Spinal Tap to his direction in A Mighty Wind , Christopher Guest brings a flare unlike any other movie out there.

This film included Catherine O’Hara, the recently passed Fred Willard, Eugene Levy, Bob Balaban, Parker Posey, Larry Miller and others who have made appearances in other Guest films.  The experience of these talented improv actors is shown off in every scene.  It is amazing how skilled they are at what they do, not only to create a cohesive story, but to also make it consistently funny.

Waiting for Guffman tells the story of stage director Corky St. Clair (Christopher Guest) who comes to the small town of Blaine, Missouri to direct the local theater show that is celebrating the 150 anniversary of the town.  Corky invites Broadway critic Mr. Guffman to see the debut of the show.

Corky populates the show with local “talent” including the dentist Dr. Allan Pearl (Eugene Levy), a married couple who work as travel agents (Fred Willard and Catherine O’Hara) and a Dairy queen worker (Parker Posey).  None of them truly have any talent, but Corky pursues the show anyway.  In fact, Corky believes that they have what it takes to make it to Broadway.

There are so many wonderful scenes featuring these talented performers.  They also have some really sweet and engaging songs, written by Guest, Michael McKeon and Harry Shearer.  The ballad “A Penny for your Thoughts” showing the heart of the picture.

While this is a satire of these small town theater shows, there is also a great deal of love shown for them as well.  It is clear that Christopher Guest has a soft spot in his heart for this type of entertainment.  Waiting for Guffman is funny, smart and contains a cast of professionals and masters.