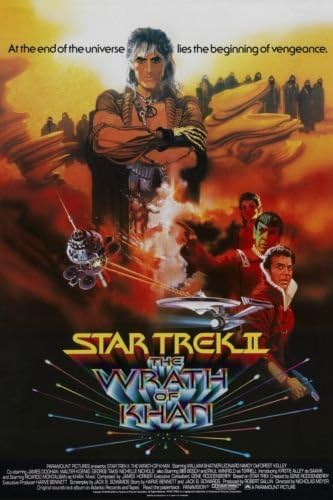 This is another of the films that the Dan Murrell film club assigned its members to watch for the Month of May.  It was a pretty good assignment.

Star Trek II: The Wrath of Khan is highly considered the greatest Star Trek film in the franchise.

The crew of the Reliant is taken over by the return of the evil Khan (Ricardo Montalban) and he had plans for revenge.

Admiral James Kirk (William Shatner) was onboard with his own crew to inspect the training ship of the Enterprise, now captained by Spock (Leonard Nemoy).  On the flight, a confusing message came from an old flame of Kirk, Carol (Bibi Besch), about turning over Genesis, a top secret scientific project.  Kirk took over command and led the ship on its way to Genesis where they cross paths with Khan.

The film is fantastic.  It shows the relationships of the classic Star Trek characters perfectly and creates powerful emotions.  The third act scene between Kirk and Spock is a scene of legend.

The rivalry between Kirk and Khan play out exceedingly well, considering that neither actor actually appeared on screen with one another.  It shows how strong both men’s performances were as the characters tried to out smart the other.

There was the introduction of David (Merritt Butrick) was basically peripheral to the story as Kirk’s grown son that we never knew about.  However, as I mentioned, David and his mother Carol were not the important aspect of the film.  It was, at best, a secondary storyline.

This film was truly the connection between the original Star Trek characters, in particular Spock and Kirk, Bones (DeForest Kelly), Scotty (James Doohan).  We get more with new Vulcan crew member Saavik (Kirstie Alley) than we do with Uhura (Nichelle Nichols) or Sulu (George Takei).

And that scene still gets me.  Even after knowing the eventual outcome of what would happen, that scene ripped your heart out.  I think this is the moment when Star Trek became more than a cult favorite and became a massive franchise.

I still believe this is the best Star Trek movie yet to be made.