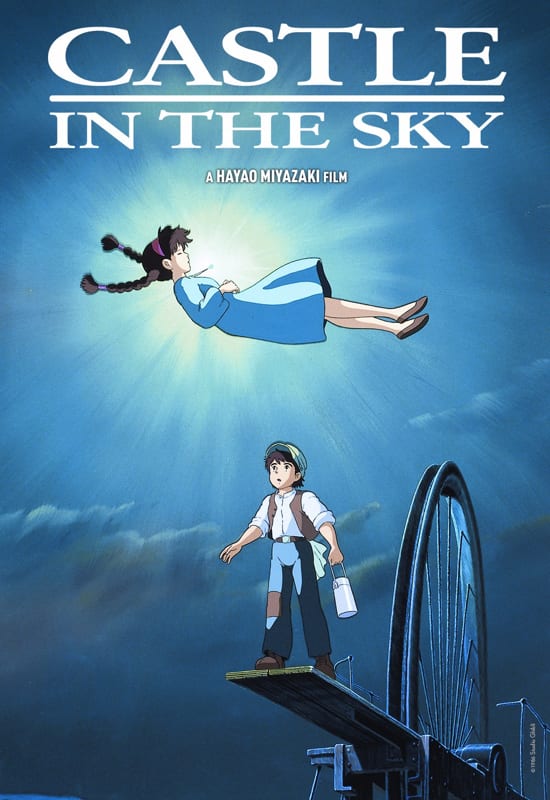 Laputa: Castle in the Sky was the first official animated film from Studio Ghibli, and it was one that I had a difficult time following, though it was not the film’s fault.

The DVD that I had had multiple glitches on it when I was watching this movie, especially about the first 20 minutes or so of the film.  That caused a real problem with understanding exactly what was happening and who these characters were.

Directed by EYG Hall of Famer Hayao Miyazaki, Castle in the Sky is a beautiful looking film, with amazing artistic animation and cool character design.

Once again, I have been watching these movies with the English dubbing done when Disney released these Studio Ghibli movies in the early 2000’s.  This film included the voice work of Mark Hamill, James van Der Beek, Anna Paquin, Cloris Leachman, Mandy Patinkin, Andy Dick, and the iconic Jim Cummings.

This tells the story of an orphan girl named Sheeta, kidnapped by government agent Muska, but rescued by young boy named Pazu.  Sheeta has a magical amulet that will lead her back to her ancestors home, a floating city of Laputa.  There is a race to find the city among a group of characters to gain the powers of the land.

Colonel Muska is a top notch villain in this film.  I love the work of Mark Hamill, who brings such a menace to his voice work.  I know that he was not the original voice, but he is such a great voice over actor that I cannot imagine that he did not make this better.

The film is beautiful to watch and has a lot of amazing action here too.  The finale is excellent and filled with drama.

It is unfortunate that the DVD did not work properly for me because this seemed to be another great animated film.