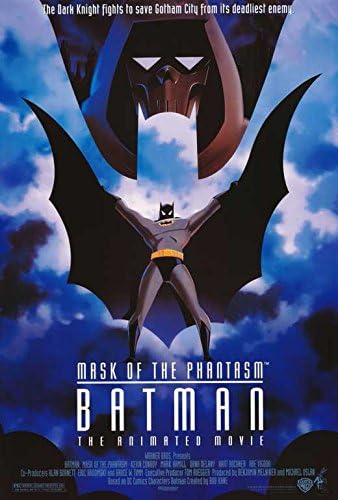 There are arguments to be made that this animated version of the Dark Knight is the best Batman film ever made.  I do not think I would go that far, but it is certainly one of the most respected and entertaining Batman movies available.

The animated movie, in the vein of the Batman: The Animated Series cartoon, gives us the best example of the World’s Greatest Detective, a moniker that belongs to the Caped Crusader, though we’ve never really seen that on the big screen.  Rumors have it that the upcoming Matt Reeve’s directed The Batman is going to give us the detective which would be very cool.

In this film, crime bosses in Gotham are being killed by a shadowy, mysterious figure in a black cloak.  The police and the criminals assume it is Batman doing the deeds, but, in truth, it is a person named Phantasm, who has arrived in Gotham with an unknown motivation.  Of course, this brings the Phantasm into conflict with Batman and they wind up facing off with the Clown Prince of Crime, the Joker, as well.

The movie has a theme running through it focusing on revenge and how it can poison a soul.  This is an intriguing idea to deal with when looking at Batman, since an argument can be made that Bruce Wayne falls into that category.  Comparing Bruce to the Phantasm is a well done tag and carries through the film.

I remember being surprised the first time I saw this movie years ago when the reveal came on the identity of the Phantasm, so the film does a good job with that.  I do believe that if I was watching it for the first time now, I would have spotted it before the reveal.

The animation has style, but it is the choppy, 90s-like animation of the cartoon.  If there is a weakness of this film, the animation would be it.  However, at the time, this was acceptable and does not pull me out of the movie.

The back story of how Bruce Wayne takes up the costume is very well done and fits with this narrative.  Although the film adds Andrea into the mix for storyline purposes, it does not detract from our Dark Knight’s arrival.  In fact, it gives Bruce another conflict within him to struggle with.

This is a great Batman movie, for sure, although it is not my favorite ever.  It is a solid story with very good pacing that shows Batman in the style that he really should be shown.