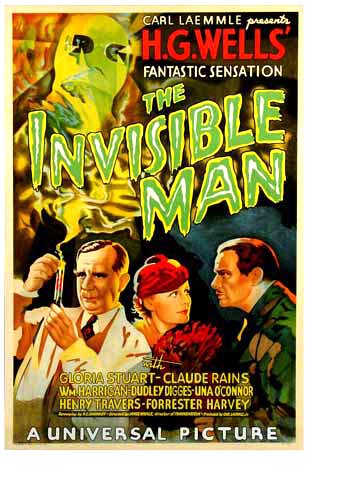 I loved the Universal monster movies as a youth.  Frankenstein, The Wolf Man, Dracula, The Creature from the Black Lagoon… they were some of my all time favorites.  However, I must say that I had never seen the H.G. Wells classic The Invisible Man until this very morning.

Claude Rains starred as Dr. Jack Griffin, who, as with any great mad scientist, experiments on himself and turns himself invisible.  The chemical he uses affects his brain as well, sending the man cascading toward madness.

We are along for the ride as we “see” the man at first bad tempered before changing into a psychotic killer.

Directed by James Whale (who also directed Frankenstein and Bride of Frankenstein), The Invisible Man has many special effects that were quite amazing for the time frame.  When you realize that this film came out in 1933, what they were able to accomplish is even more impressive.

Nearly the entire cast of secondary characters are unimportant here.  Even the Gloria Stuart as Griffin’s love Flora felt unimportant to the story.  The only other character of any real repute here is Kemp, played by William Harrigan.  Kemp was Griffin’s associate and partner and the man whom Griffin approached to help him formulate the antidote.  Kemp, understandably creeped out by the slowly insane invisible man, betrays Griffin by calling the police.  The fate of Kemp was a standout moment of the movie.

This role turned Claude Rains into a star which is remarkable since it was a role that you never see his face until the very end of the movie.  It is a strong performance from Rains, who was unable to use facial expressions in his acting and had to require other means to emote what he wanted to do.