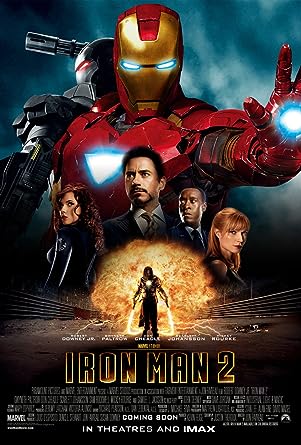 The third movie of the Marvel Cinematic Universe is the first sequel.  Iron Man 2 came out quickly and it showed some early issues.  However, Iron Man 2 was a film that Marvel Studios learned a lot from.

Iron Man 2 was not terrible, but there are definite problems with the film.  The film is too full of world building.  The movie would have been a better film if it had been streamlined.  There are too many threadlines going through the film.  The Whiplash story.  The palladium poisoning.  Tony’s drinking issue.   Tony’s daddy issue.  The introduction of the Black Widow.  The US Government’s attempts to confiscate the Iron Man “weapon.”  Hammer Industries.  SHIELD.

There could have been two really good movies with all of this, but crammed together felt messy.  Marvel Studio learned their lesson from this film and did not repeat those mistakes as the franchise continued.  The lesson… do not put world building ahead of the story or the characters.  I supposed Iron Man 2 is a necessary evil.

Not to say that the film is bad.  There are some wonderful, winning moments. Heck, we get to hear Clark Gregg’s Agent Coulson say to Tony Stark, “…I will taze you and watch Super Nanny while you drool into the carpet.”

Iron Man 2 has some great action and introduces us to the War Machine (Don Cheadle).  I know some were unhappy with Terrence Howard being replaced as James Rhodes, but I am a fan of Don Cheadle since the Picket Fences days so I was ready to accept him immediately.

The good in Iron Man 2 outweighs the bad, but just barely.  It is still a fun movie to watch because, not in smart part, of Robert Downey Jr. as Tony Stark.  He is as witty and entertaining as he has ever been.  He is also growing into the role of Stark.  You can see the character beginning to develop into what we know him as today.  Tony Stark is the heart of the film and, because of him, this film is fun, despite its flaws.