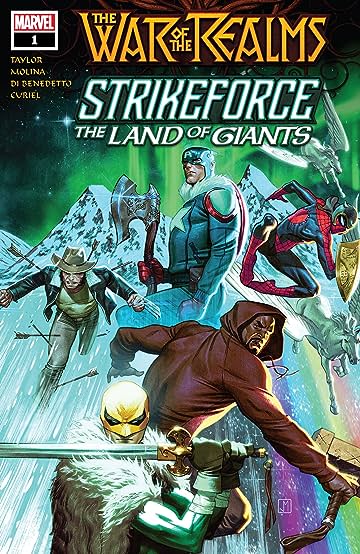 The War of the Realms Strikeforce: The Land of Giants#1

The War of the Realms has been a mixed bag for me so far, but it does seem that the issues that I have really enjoyed have been the ones featuring Spider-Man.

Writer Ton Taylor does a great job giving us Spider-Man in this story, as the Web-Head is giving us the narration of the story as if he were a soldier writing a letter home to MJ.  There are some great emotional beats in this issue, including a strange, but somehow compelling relationship between Spidey and his winged horse he named “Buttercup.”

Now, the issue also features Logan, Captain America, Iron Fist and Luke Cage, as the group goes into Jotunheim to attempt to retrieve Thor, but honestly, they do not feel as if they are the significant parts of the story.  This is a Spider-Man story, looking at how Spidey was out of his element and needed to adjust to his new surroundings.

The biggest problem I had with this issue is that all of this happened already several weeks ago. We know that this group ( The Four Who’ve All Punch Apocalypse etc.) had already brought Thor out of his berserker rage and got him out of Jotunheim.  It felt like a flashback and, since we know everything that happened, it lost much of its stakes.  The book tried to make up for that with “Buttercup” but that was only somewhat successful.

As a one shot, this was a good story with a great bit of character work with Spider-Man.  This issue should have come out earlier to avoid the feeling that it is not an important story.  Otherwise, I enjoyed the issue well enough.