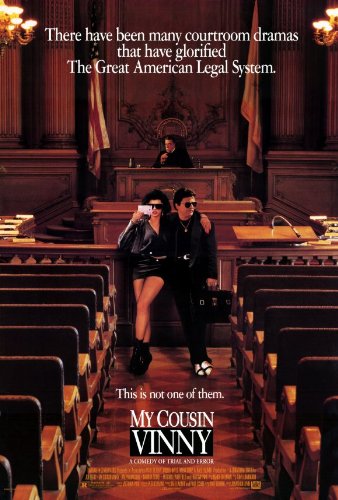 My Cousin Vinny becomes the 198th film reviewed in the Doc’s Classic Movie Reviewed section at EYG.  I had seen a video on YouTube from a lawyer who was looking at how accurate the film was in courtroom procedures.  It did very well, with many scenes being considered great for even teaching how to do things.

Joe Pesci is Vinny, the lawyer, and his fiance is played by Marisa Tomei.  They have to go down to Alabama to be the lawyer for his cousin Bill (Ralph Macchio) who, along with his friend Stan (Mitchell Whitfield), have been incorrectly charged with murder and they need Vinny’s help.

The problem is that Vinny has never won a case and has plenty of things he had no clue about.  The judge (Fred Gwynne, famous from The Munsters) has it out for Vinny because of the way he dresses and acts.  Vinny, from New York City, has troubles around Alabama as the “fish out of water” and unable to sleep.

There is a ton of chemistry between the entire cast here.  The ensemble is tremendous with the exception of the public defender with the stuttering problem.  I dislike that character and I actually fast-forwarded through his part.

Marisa Tomei won an Oscar for Best Supporting Actress for her role in this movie, and her scene as the witness in the trial is one of the best scenes in the movie.

My Cousin Vinny is a fantastic movie and I love watching it any time I can.