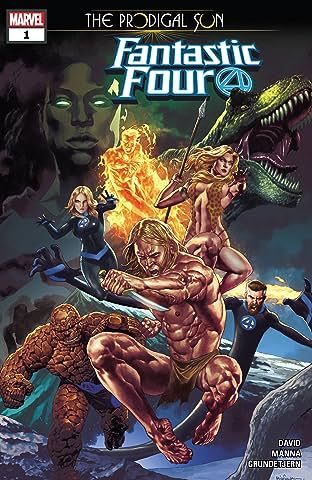 We are introduced to a brand new hero in the Marvel Universe and he goes by the name Prodigal.  We learn very little about him in this issue as he lands in the Savage Land and draws the attention of Ka-Zar and Shanna, who contact the Fantastic Four for help.

We do learn that his real name is Prah’dGul and he claims to be the greatest warrior in the five galaxies.

Prodigal meets up with Rojash and the Swamp People in the Savage Land and they are trying to get some weapons found inside the High Evolutionary’s old lab.

Honestly, my first opinion on Prodigy is a bit lackluster.  He was very arrogant without any reason, or at least none that we have been given.  There is little else that we have found out about him.  The dialogue of the character was not a strength, as he used a lot of snippy remarks that are intended to be funny, but seem to fall flat for me.

Honestly, I was much more interested in the meeting of Ka-Zar and Shanna’s son Matt Plunder, who has apparently fallen into some kind of time portal in Lemuria and aged to a teenager, and Valeria Richards, daughter of Reed and Sue.  I would want more of this.

It appears as if the character of Prodigal is being introduced across several one-shot issues like this one, with the next issue being a Silver Surfer crossover.  Not sure how I feel about this character yet as we really get very little about him.  He is very powerful and knows it and he wants to find a spaceship to get off the planet earth.

I’d really like more Ka-Zar and more Matt and Valeria.  Other than that, Prodigal is a we’ll see.