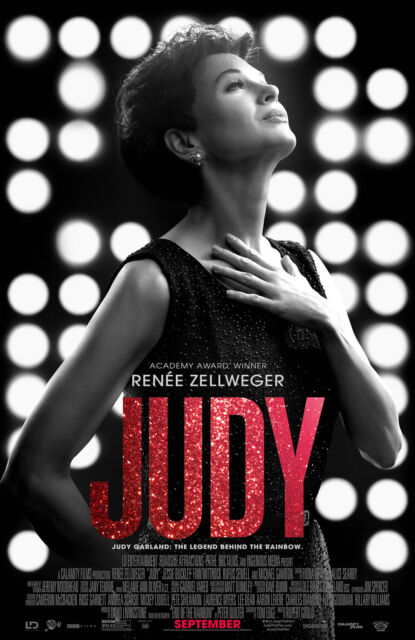 We have had a lot of biopics about music icons recently.  From Freddie Mercury to Elton John, the music industry has been a hotbed of movie subjects.

Add one more to the list with the film based on the last year of the life of Dorothy Gale herself, Judy Garland.

In an attempt to get money to provide a more secure life for her children, Judy Garland (Renee Zellweger) accepted a tour of London despite her own struggles with alcohol and medication as well as her own tragic past.

Renee Zellweger is the absolute best thing about Judy. Her performance is transformative and powerful.  I believe she has to be considered the front runner, if not the lock, for the Academy Award for Best Actress from this performance.  She brings such an emotional depth to the character, from the lows of her addictions to the highs of her performances.

The character of Judy Garland is not shown through rose-colored glasses either.  We see the bad choices and the mistakes that she makes and the consequences of those actions.  One of the stronger aspects are the series of flashbacks back to the Dorothy-aged Judy (Darci Shaw) which detail the downright abuse heaped on Judy by the movie studio and her handlers who were more concerned with the image of Judy than the actual person.  There were some shocking instances of cruelty and potentially even abuse by those in power over the young girl that you understand why Judy grew up to be such a mess.

The film had a huge tragic feel to it for much of the run time.  The life that the young girl had to live through to the challenges facing the older version who was just looking for a way to be a mother to her children were heartbreaking.  Renee Zellweger was able to remain this woman riddled with poor choices without losing the connection to the audience.  Even when her own worst behavior was her undoing, you could relate to the pain and the challenges faced by the songstress.

One of the best scenes of the film included a gay couple who had waited after a show and met Judy.  Judy was so lonely that she invited them out to dinner and wound up spending an evening with them.  It was such a lovely, emotional scene that it truly helped to humanize Judy Garland.  It also effective when the couple returns later in the film.

Speaking of later in the film, the final part of the movie was just epic.  I loved how they ended the movie and I found myself with tears in my eyes from the power of the moment.  It was both sad and tragic, while at the same time uplifting and hopeful.  It ended with such a strong couple of scenes that any other flaws that might have been in the film were brushed away.

The film may have been a slow developing one, but I was riveted the entire time.  Renee Zellweger was special in her performance and the ending scene was one of the most emotional times of the year.  Judy is a terrific biopic.