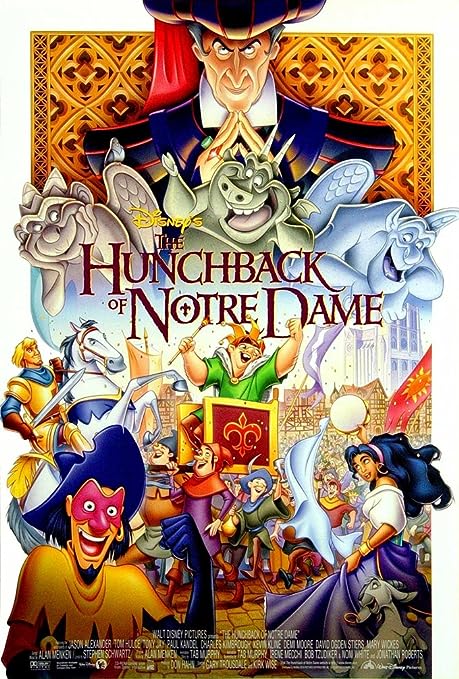 Back to the Disney Plus Binge with an animated film that came at the outer edge of the Disney renaissance of films during the 1990s.  After Little Mermaid, Beauty and the Beast, Aladdin and Lion King, there were some other animated movies that were not as widely accepted or beloved.  The Hunchback of Notre Dame is one of those, unfairly.

This film is the Disney adaptation of the classic Victor Hugo novel of the same name.  Paris 16th century.  Quasimodo (Tom Hulce) spends his days in the bell towers of Notre Dame, at the whim of his master, the wicked Judge Claude Frollo (Tony Jay), who, unbeknownst to Quasi, killed the hunchbacks mother when Quasi was but a baby and only spared the baby with the hopes of one day using him in his quest to kill all gypsies.

When gypsy girl Esmeralda (Demi Moore) showed up Frollo, he set upon a mission to find her no matter what.  Quasimodo had fallen for Esmeralda and had helped her escape from his master’s clutches a couple of times.  Along with the help of the noble Captain of the Guard, Phoebus (Kevin Kline), the trio hoped to prevent Frollo’s mad scheme to kill Esmeralda and rid Paris of all the gypsies.

This film is way better than people give it credit for as it is criminally underappreciated.  It is certainly the darkest of the Disney “renaissance” of films, and it has one of the worst antagonists (by which I mean cruelest and wickedest.  He is actually quite the awesome villain) around in Judge Frollo.  Tony Jay’s voice talents is perfect for the voice of the monstrous man.

There are a ton of major themes running through The Hunchback of Notre Dame, including the acceptance of those who are different than we, the fanaticism of religion, and the dangers of genocide.

There are also laughs to be had in The Hunchback of Notre Dame.  The three gargoyle friends of Quasimodo (Jason Alexander, Mary Wickes and Charles Kimbrough) provides some typical Disney sidekick humor.

There is a definite vibe of Beauty and the Beast combined with Aladdin in this movie, but that does not make this subpar.  The action is top notch and the animation was as good as any during the time period.

Some may think that it is too violent and adult for little kids, and that may be true, but it is a compelling and dramatic animated movie nonetheless.