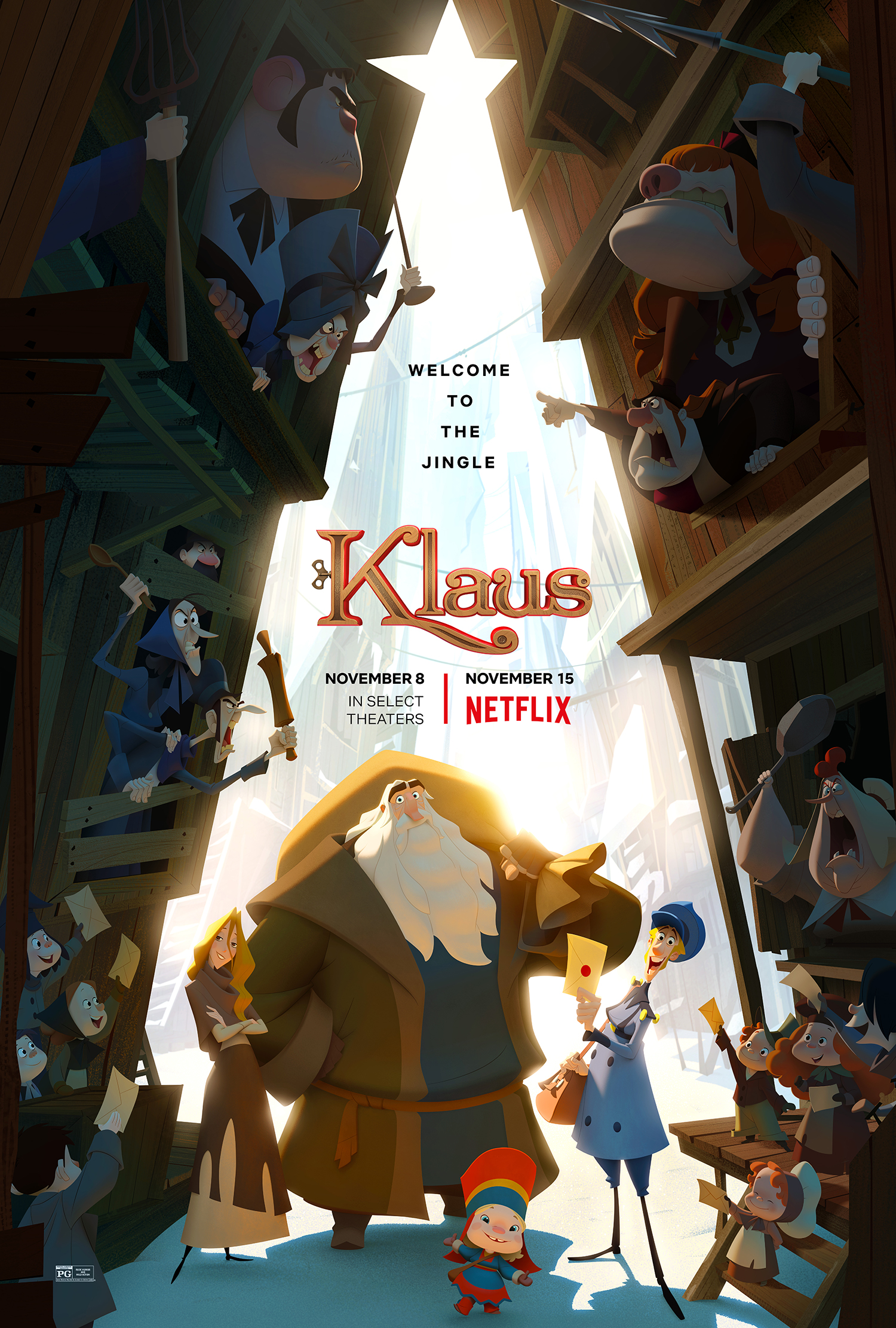 When you are enjoying your subscription to Disney Plus, don’t forget about Netflix, because Netflix just dropped one of the best animated movies of the year, just in time for the Christmas holiday (well…okay, Thanksgiving, but you get the idea.)

Klaus is a re-imagining of the Santa Claus mythos that is as charming and heart felt as any film I have seen in a long time.

A simple act of kindness always sparks another.

Jesper (Jason Schwartzman) was a spoiled brat of a man who exploited his family’s money to live a pampered and lazy life.  His lack of interest in the family job as a postman worried his father so he banished his son to an island called Smeerensburg with the near impossible task of sending 6000 letters in one year.  If he failed, he would be cast out and stripped of his inheritance.

Once in Smeerensburg, Jesper met an old woodsman named Klaus (J.K. Simmons) who was isolated and depressed.  Jesper discovered Klaus’s shed full of handmade toys and he formulated a plan to get the local kids to write letters to Klaus asking for toys in return.  Little did Jesper know how this would strike a positive note into the conflict-laden island.

Smeerensburg had a long time feud between the Krum and the Ellingboe families and the hatred between them had fueled the tone of the land for generations.  Joan Cusack and Will Sasso voiced the respective heads of the two warring families.  These two factions did not like seeing the positivity that had started to sweep through Smeerensburg causing the two families to form a tentative truce to face against a common enemy.

This film is extremely clever and provides a new explanation for many of the Santa Claus iconography such as the cookies and milk, the chimney and the flying reindeer.

The first act of this movie, however, has its share of scary images and moments.  The introduction of a lot of the story is surprisingly dark and even a little twisted.  Yet, by the end of the movie, it is full of warmth and heart and would be a fantastic holiday film that the entire family would enjoy.  The ending has all the feels too as the emotional beats are used prominently.

I also found myself laughing out loud several times throughout the run of Klaus.  It brings every bit of emotion into the film and succeeds in glorious fashion way more than it does not.

The animation is beautiful too, with the character designs standing out above everything else.  SPA Studios and Aniventure create the film, an English language Spanish animated film written and directed by Sergio Pablos.

Klaus was a genuine surprise and watching this made me feel such a range of emotions.  It could develop into one of those classic Christmas movies that you enjoy every year.  It is a triumph.  It is available on Netflix right now.

One thought on “Klaus”