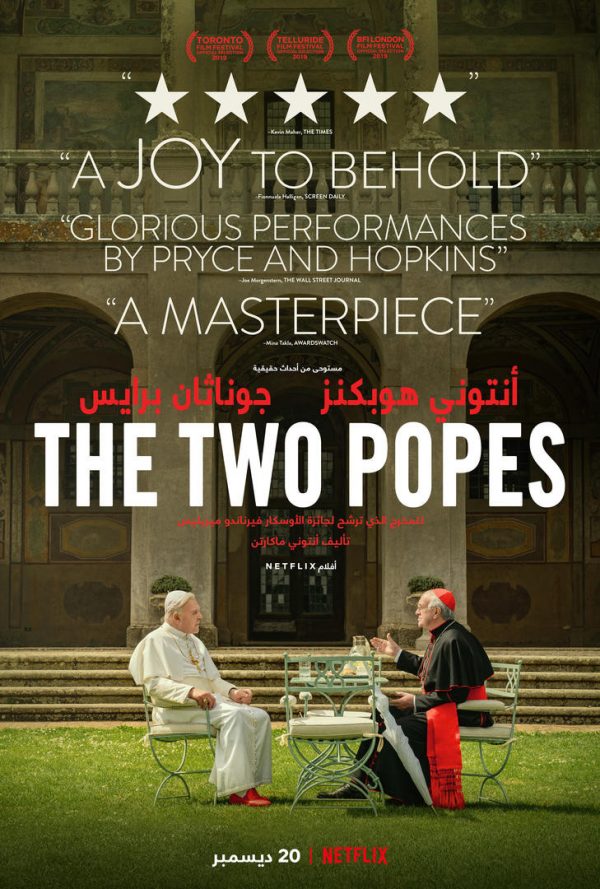 There have been many films like this one over the years.

What do I mean by that?  Certainly, the film The Two Popes is a groundbreaking story of the resignation of Pope Benedict and the rise of Pope Francis.  Yes, this biopic is a story that is unlike any other because of the rarity of the situation.  But that is not what I mean.

What I mean is that this film is one where the movie itself is not the greatest film ever made.  In fact, the story is a tad basic.  However, you have two powerhouse performances from the lead stars, Sir Anthony Hopkins as Pope Benedict and Jonathan Pryce as Pope Francis, that elevates the movie into a higher stratosphere that it would have reached had it not been for these two performances.

There have been plenty of movies that have been elevated from being average into exceptional by the actors.  Eddie Redmayne’s performance as Stephen Hawking in Theory of Everything, Benedict Cumberbatch’s role as Alan Turing in The Imitation Game, Meryl Streep in The Iron Lady spring to mind.  These are forgettable movies without the lead performances.

The Two Popes is blessed with two such performances.  Hopkins and Pryce are brilliant in this movie and their interaction is what sells the narrative completely.  They dive into the background of each man, but the film truly comes alive when Hopkins and Pryce are exchanging words, no matter which language they used.

In 2012, Cardinal Bergoglio (Pryce), a liberal Cardinal from Argentina, was becoming frustrated with the path of the Catholic Church.  He was preparing to go to the Vatican to offer his resignation to Pope Benedict.  However, Benedict, who had been facing an internal struggle of his own, had other ideas.  Deciding that he was unable to effectively lead the Catholic faith into the new times, Benedict requested to see his old rival with the intention of Bergoglio being the one to announce Benedict’s resignation and, hopefully, assume the mantel of the pontiff.

In the world we live in today, this film is an important one to show how two people with differing viewpoints on just about everything could come together to cross the divide.  This is something that we could look to as inspiration for our own problems.

Both actors brought their best game here and the film is all the better for it.  In what could have been a dull little picture, Pryce and Hopkins make it essential viewing and compelling characterization.

The Two Popes is currently available on Netflix so you should take the opportunity to see this.  Both actors have a chance to be nominated for Academy Awards,as their performances are that good, and makes the movie better.