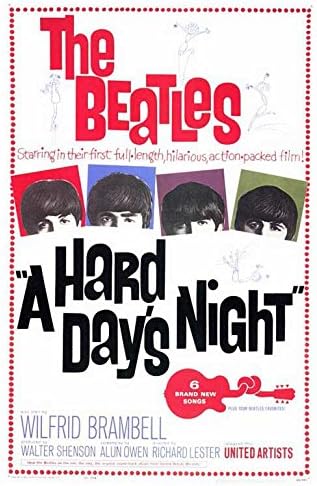 The second film of the Social Distancing Binge-A-Thon and the final film this Friday night is A Hard Day’s Night, from the Beatles.

This is a simple story of the four lads from Liverpool and their attempt to survive two “normal” days as the Beatles, capping off with a live performance on TV.

John Lennon, Paul McCartney, George Harrison and Ringo Starr play cartoonish versions of themselves, chasing around a train, the city, chased by the police and in search of Paul’s mischievous granddad (Wilfrid Brambell).

The Beatles show off their remarkable charisma and humor in the movie, which, of course, comes alive when the Beatles’ music plays.

As a Beatles fan, this was a lot of fun.  It was lightweight as a movie, but the movie makes up for any problem with the script.  No one was coming in to this for an Oscar winner (though it was nominated).  It was a real look at Beatlemania and maybe even some of the stresses that would lead to the break up of the group six years later.