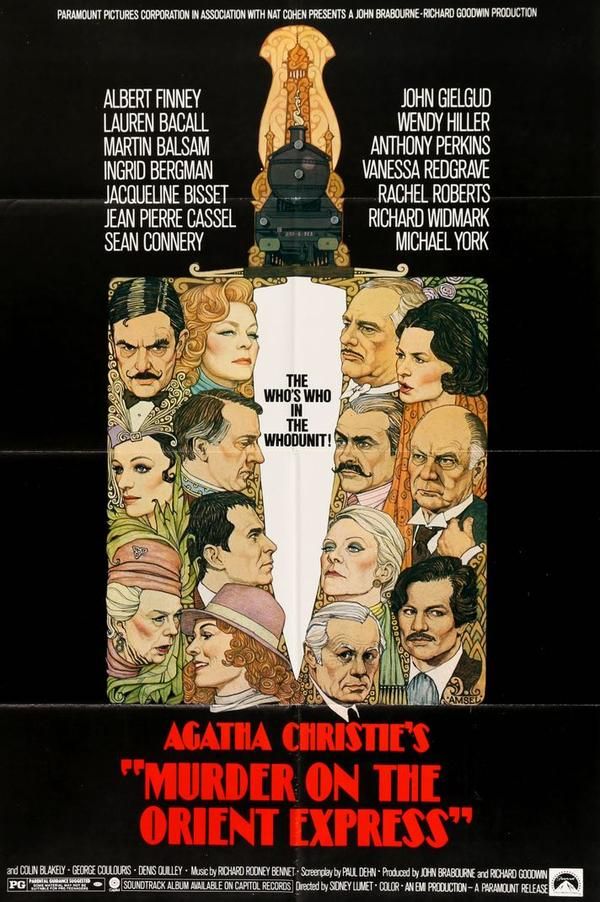 Almost three years ago, I saw the remake of Agatha Christie’s Murder on the Orient Express starring Kenneth Branagh.  I had never seen the 1974 version, and, though I did not hate the new version, I did not love it either.  I thought maybe one day I would watch the original, but, with the knowledge of the solution, it did not become a top priority.

Seeing it on Amazon Prime, I decided that this was the perfect chance to see the murder mystery.  I am glad I did.

When noted Belgian detective Hercule Poirot (Albert Finney) wound up on the Orient Express, he found himself in the middle of a murder mystery.  American businessman Ratchett (Richard Widmark), who had approached Poirot to be his bodyguard on the train (which Poirot refused), was found dead in his cabin, Poirot began an investigation which was hampered by red herrings and the train being stalled by an avalanche of snow in remote Yugoslavia.

Even though I knew the eventual solution to the mystery, the process getting their by Hercule Poirot was fun and entertaining.  Finney was just wonderful as the Belgian detective flexing his “little grey cells.”  Much of the fun of watching Poirot piece together the seemingly unsolvable case is truly part of the pleasure.

There is a definite flair to the look of the movie, style throughout.  The direction of the film is impeccable.

The only piece that might knock this down a bit is that the solution is something that is far fetched.  Still, it really works here and became iconic in mysteries moving forward.

The Murder on the Orient Express (1974) was beautifully done and expertly put together.  It features one of the strongest casts you will ever see and a great mystery.  Hercule Poirot deserves his spot as one of the most epic of the “gentlemen detectives.”